From the moment you step on to St Pierre and Miquelon, you’ll know you’re not in Canada anymore. Little Peugeots and Renaults cruise the roads while ATMs spit out euros. French flags flap in the wind and suddenly everyone speaks French.

It’s a true taste of France just twenty-five kilometres from Newfoundland. Most people, including Canadians, have no idea that “Europe” is so close.

St. Pierre & Miquelon is a self-governing French territory accessible by ferry from Newfoundland or by plane from St. John’s, Halifax, Montreal, and even Paris. You’ll find baguettes, croissants, and Bordeaux. The time zone is different, the electrical outlets are different, and if you leave your cell phone on, you’ll be charged international rates.

There are essentially two islands – Saint Pierre and Miquelon. St. Pierre is the smaller island but is the most populated and developed, with approximately 5500 residents. Miquelon is much bigger in size but has only 600 residents or so, making it far wilder.

There’s also Langlade, which is connected to Miquelon by a beautiful sand bar. No one lives here but there are some summer cabins. Both Miquelon and Langlade are great for exploring the landscape, hiking, and bird-watching. Saint Pierre, however, is better if you’re looking for that “french town” feel, as well as history and culture.

On a recent trip to Newfoundland, my family and I decided to spend three nights on the French islands, with two nights in St. Pierre and one night in Miquelon. It was June and thus, the weather was much more unpredictable. Our first day of experiencing St Pierre and Miquelon tourism was beautiful and sunny.

The rest of our time there, unfortunately, was cold, rainy, and windy, which hampered most of the activities we had planned to do. However, we still explored as best we could and talked with lots of locals about tourism on both islands. We also picked up some tips that we’d like to share with you should you decide to take a trip to one of the most unique places to visit around Canada.

When to Visit St. Pierre and Miquelon

You may also want to time your visit with a festival or event, such as the Miquelon-Langlade half marathon race, the Lobster Festival, Bastille Day, the Basque Festival, and the Seafood Festival. There are a number of festivals and events each year. 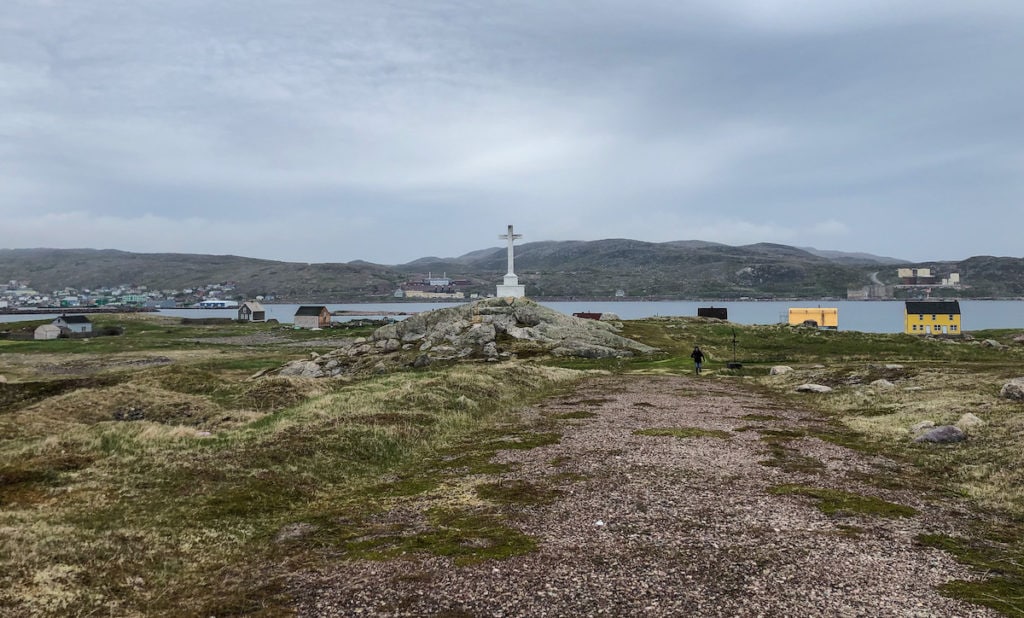 While St. Pierre & Miquelon are very close to Canada, it does belong to France and therefore, has certain intricacies that apply. Below are some tips and advice to keep in mind when visiting the islands. 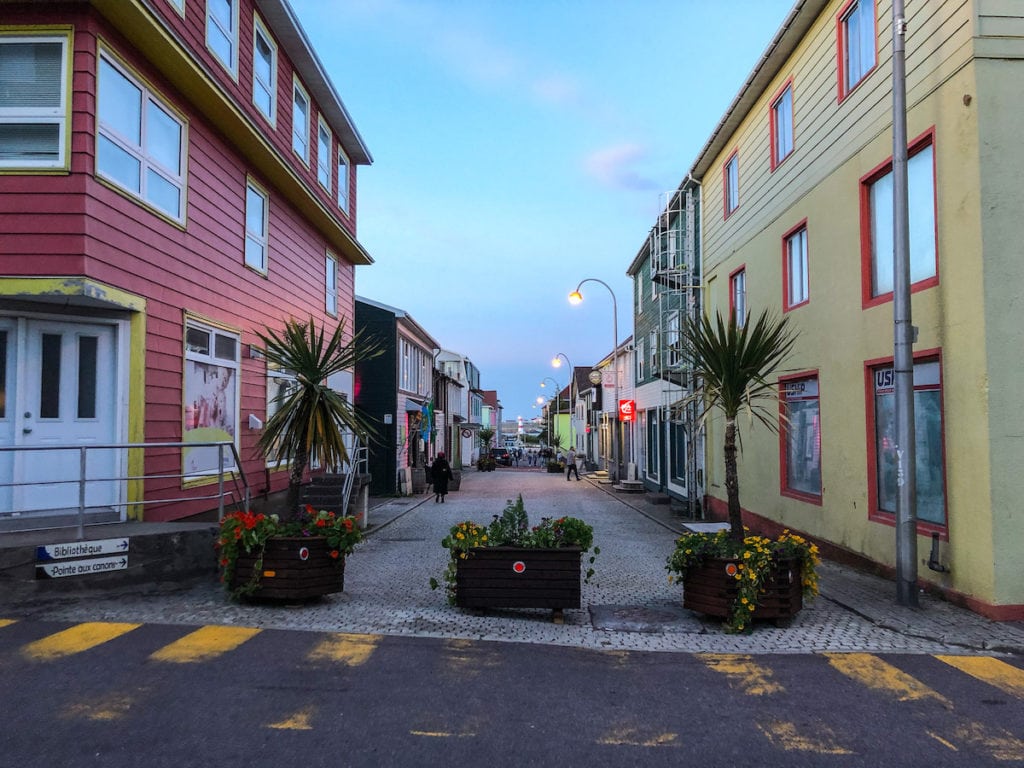 Things to do in Saint Pierre

Although small in size, Saint Pierre is where most of the population on these French islands in Canada live. There are about 5500 residents, as well as a few hotels, restaurants, tours, and activities. The island can easily be explored on foot. Below are some of the things you can do.

Walk the Streets of this North American France

Easily explored on foot, St. Pierre is a great place to walk. Just like much of Europe, the town has lots of narrow streets filled with vibrant shops and restaurants. Whether you decide to take a city map or explore at will, just lace up your shoes and enjoy a stroll in little France.

Accessed via a 5-minute ferry, Ile-Aux-Marins is where the town got started. This was a community of fishermen and pioneers and is now a wonderful way to get transported back to a time when conditions were much rougher than today.

You’ll see beautiful colourful houses, an old cemetery, the drying grounds for fish, and a really unique, old church and school. It’s a lovely spot and if it’s a nice day, you could spend the better part of the day learning about history, going for scenic walks, and even enjoying a tasty meal. This spot is highly recommended.

If you’d prefer a guided tour to learn more about the area, there are many small tours available with a local guide. Some of these tours include architecture and heritage, traditional housing, prohibition, the cemetery, and insight into the unique city itself.

There are also driving tours, which is what we did due to a lack of time. This is done in a mini-van, which takes you all over St. Pierre with explanations along the way. 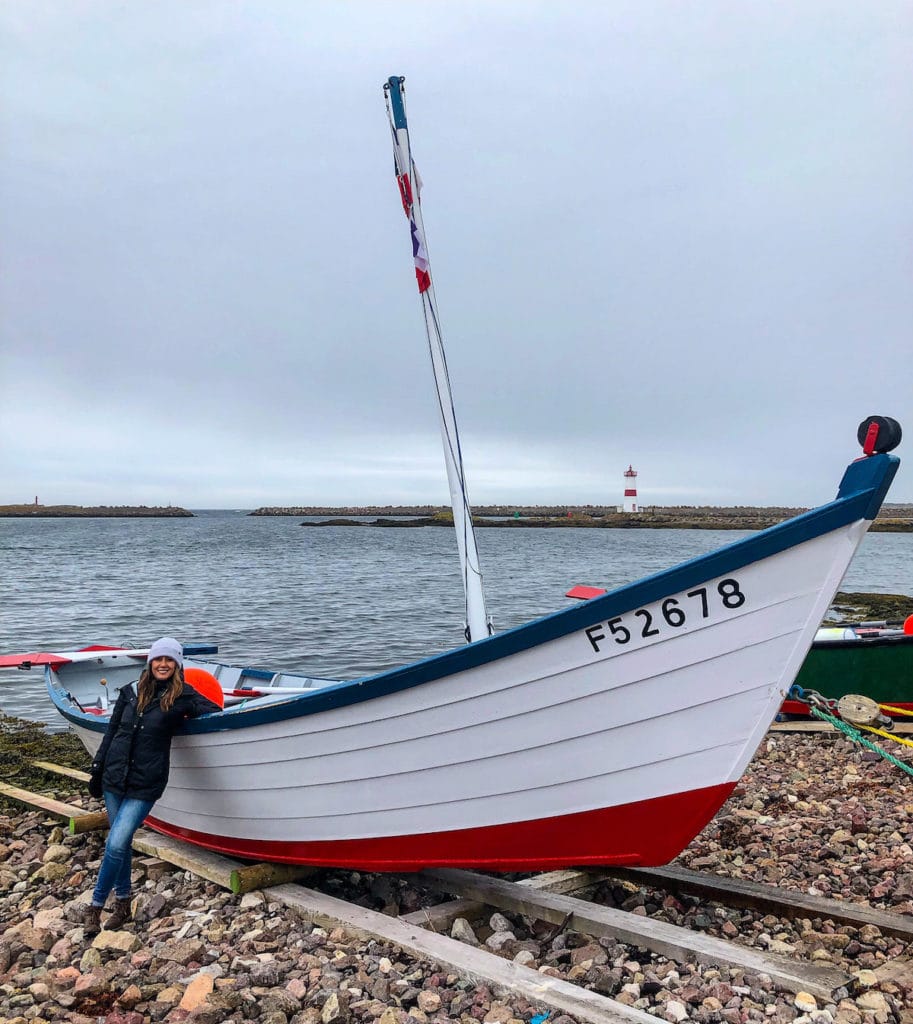 There’s even a guillotine – the only one that was used in North America. They also offer bilingual architectural walking tours. The Heritage Museum, on the other hand, is a small locally-owned museum displaying objects that testify to the social, economic and religious development of the last two centuries.

Just like in Canadian Newfoundland, Dory’s were the king of the boats back in the day. The Zigotos are a group of friends fascinated by the dories, which are the traditional boats of this French archipelago.

Unfortunately for us, the weather didn’t cooperate for going out in a dory (though it is something you can do), we did go for a tour of where they repair old dory’s and learned a lot about their history with St. Pierre. They’re great guys too, and if you can actually make it out in one, it’ll likely be a highlight of your trip.

Due to its proximity to English-speaking Canada, Saint-Pierre has become a popular destination for anglophone students wishing to become immersed in the French language and culture. St. Pierre offers a specialized language teaching facility named the FrancoForum and is a great place to learn the language. 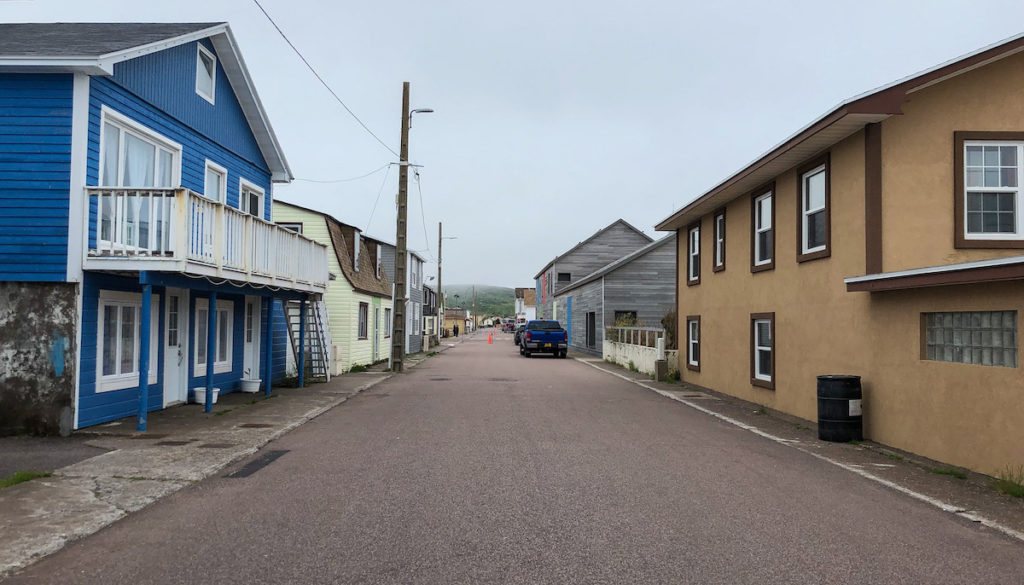 Things to do in Miquelon

Although much bigger in size compared to St. Pierre, Miquelon has only about 600 inhabitants. While there is a small town to explore, this island is best visited for its natural areas. The sand bar that connects Miquelon to Langlade looks particularly impressive. Below are just some of the things you can do.

Due to the weather on our visit, this was practically the only thing we could do, but it was a great way to get a taste for the island without going out and doing some hikes. We learned about the geology and ecology and also saw some videos about life on the islands and some of the beautiful scenery.

Take Eco-Walks around this French Island in Canada

These locally guided walks are offered through the Nature Interpretation Centre. The various walks range from 2-5 hours and can be done on both Saint Pierre and in Miquelon-Langlade. Both offer great ways to get into nature on the islands.

These tours are also offered through the Nature Interpretation Centre and take you into the history and heritage of the area, as well as an opportunity to get out into the various natural landscapes. 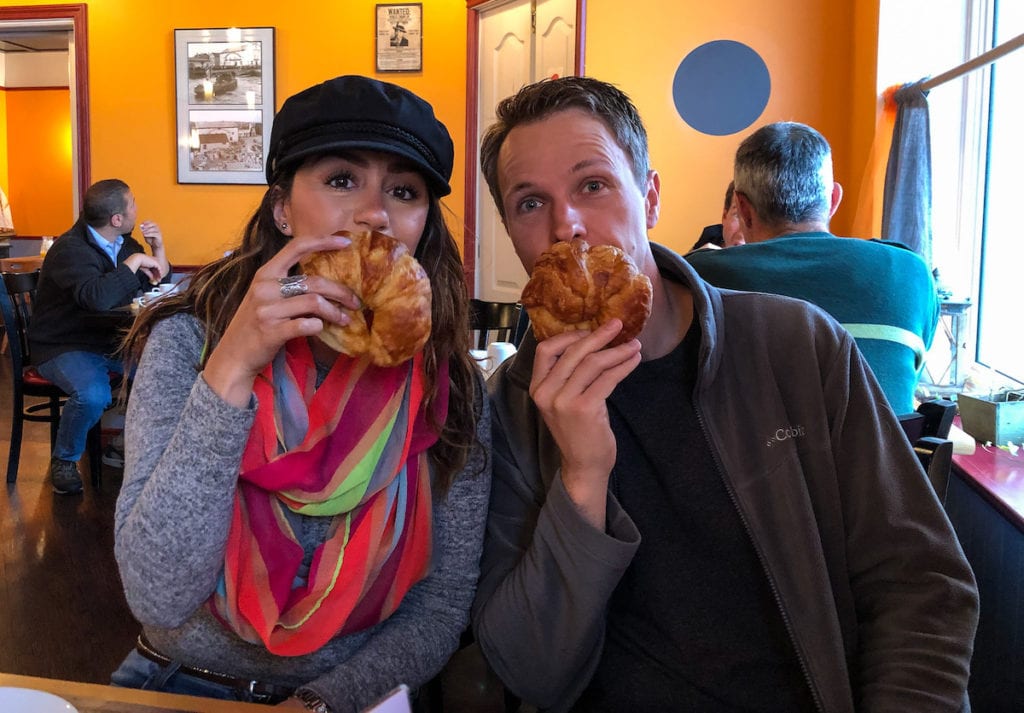 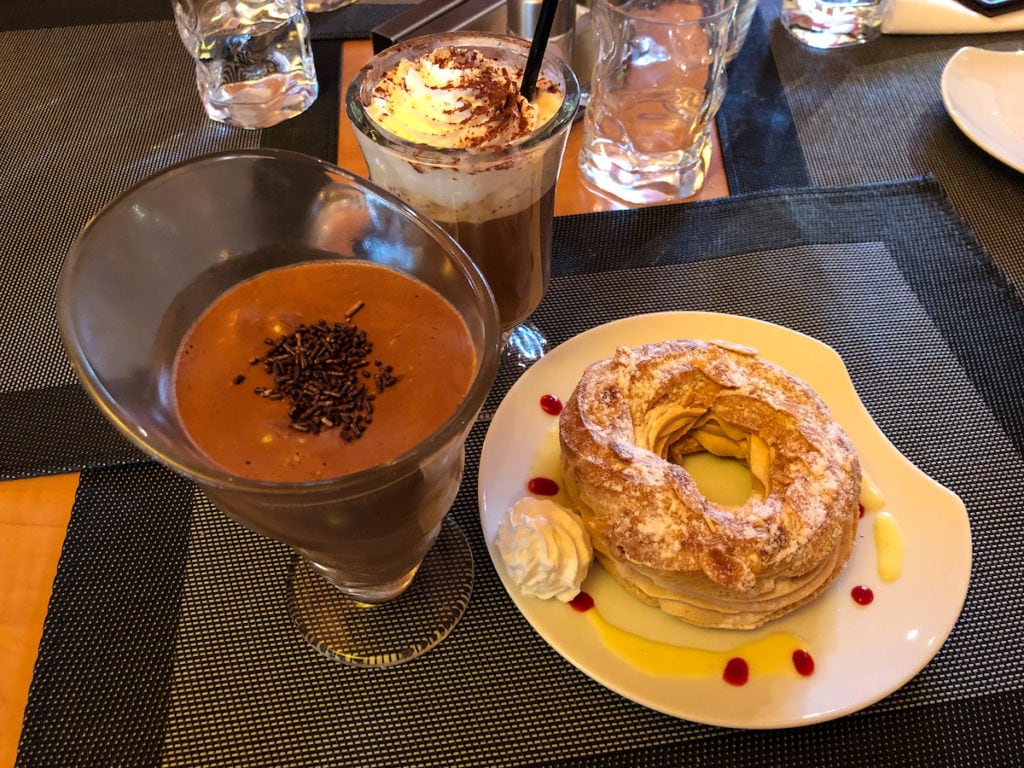 What to Eat in Saint Pierre & Miquelon

There are a few restaurants in both Saint Pierre and Miquelon, but it’s best to make a reservation. Due to both tourists and locals frequenting the very few restaurants, they do fill up during the busy summer months.

You’ll find a wide range of tasty food, including a variety of French cuisine, pizza, and baked goods. There are also grocery stores if you would like another option. Breakfasts are often quite light, consisting of croissants and baguettes. In Saint Pierre, we loved the pizza at Le Feu de Braise as well as the food at Crêperie Restaurant du Vieux Port.

Those who love seafood might want to time their visit with the Seafood Festival that is held every year in mid-August in the small town of Miquelon. 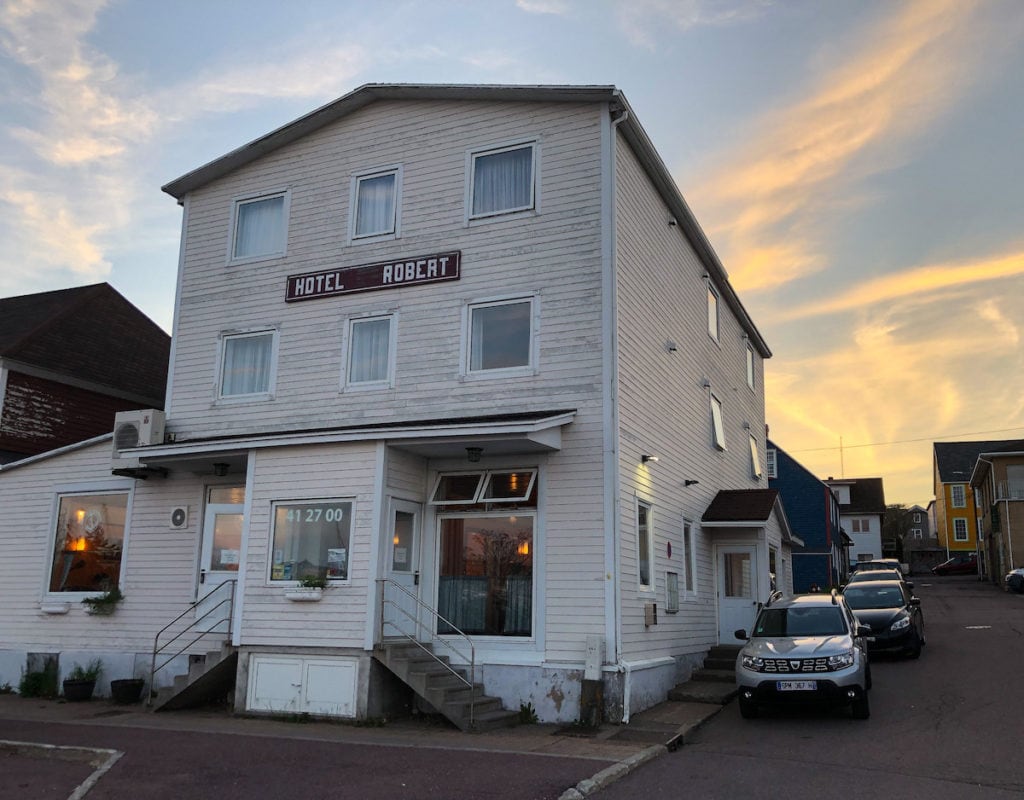 There are a few options for accommodation, including hotels, guest houses, and vacation rentals. We highly recommend booking your accommodation before your arrival, as they can fill up very quickly during the busy North American tourism months.

In St. Pierre, you’ll find all the options listed above, but in Miquelon, you’ll find only guesthouses and vacation rentals. Both options are good.

How to Get to St. Pierre & Miquelon

St. Pierre is reached by both plane and ferry. For the ferry, you’ll take it from Fortune, Newfoundland. It takes approximately 1.5 hours to get to St. Pierre or Miquelon. The ferry from St. Pierre to Miquelon also takes about 1.5 hours.

If you’d rather fly to the islands, there are a number of Saint Pierre and Miquelon flights. As previously mentioned, you can fly from St. John’s, Halifax, Montreal, the Magdalen Islands, and even Paris, France.

Things to do in Canada

Oftentimes, people will visit Saint Pierre and Miquelon during a Newfoundland Road Trip. Newfoundland is one of our favourite provinces and if you’re going to be spending time there, we think you’d like these articles below: 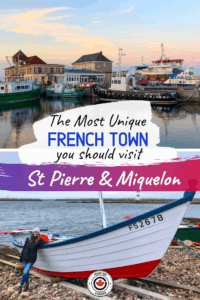 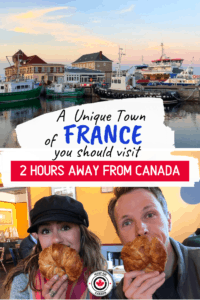