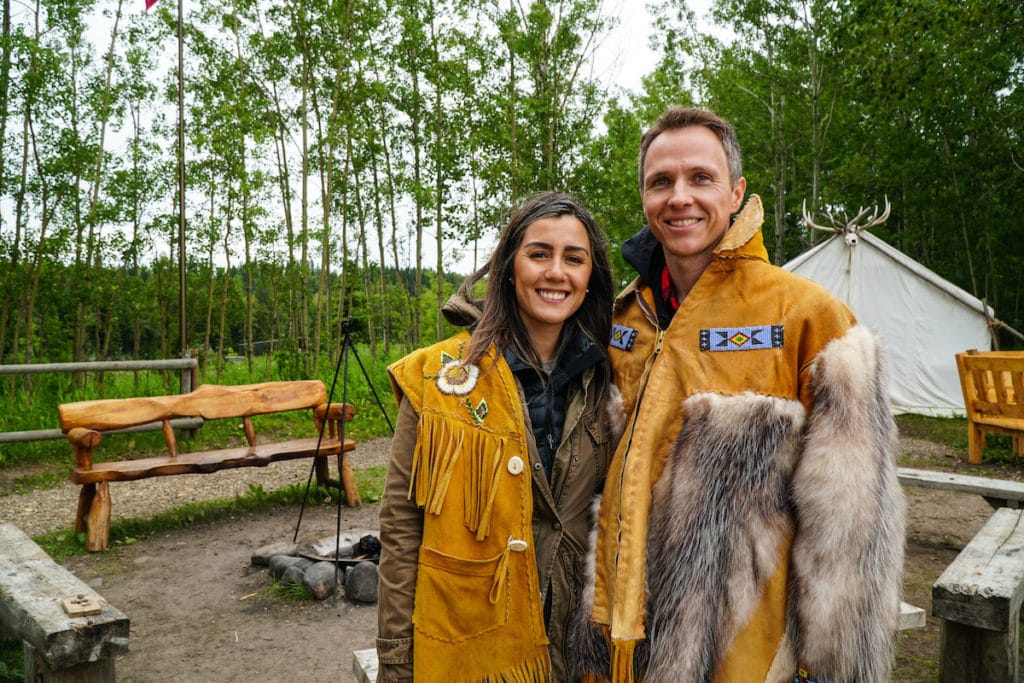 (This post was sponsored by AMA Travel and Best Western. AMA Members save up to 15% on Best Western stays in Canada, the U.S., and worldwide. Your AMA Membership can save you – whether you need roadside assistance, to book a vacation or at one of our Rewards partners. Check out amatravel.ca/bwbloggers to find out more and see the adventures other bloggers went on!”

When it comes to travel, especially in Canada, it’s hard to beat a good ol’ fashioned road trip. With such wide-open areas, nature, and small towns, road trips are the best way to see the second largest country on Earth. As an Albertan, I’ve seen a lot of my home province. From small prairie towns in the South to small mining towns in the North and almost everything in-between, I’ve covered a lot of ground. Yet, I had never been to Rocky Mountain House. That is, until now. Located just 77 km west of Red Deer, and only 200 km from both Edmonton and Calgary, Rocky Mountain House is a wonderful place to explore on a road trip. It’s also just 170 km from the world-famous Icefields Parkway and sits on the Cowboy Trail, another epic Alberta road trip. 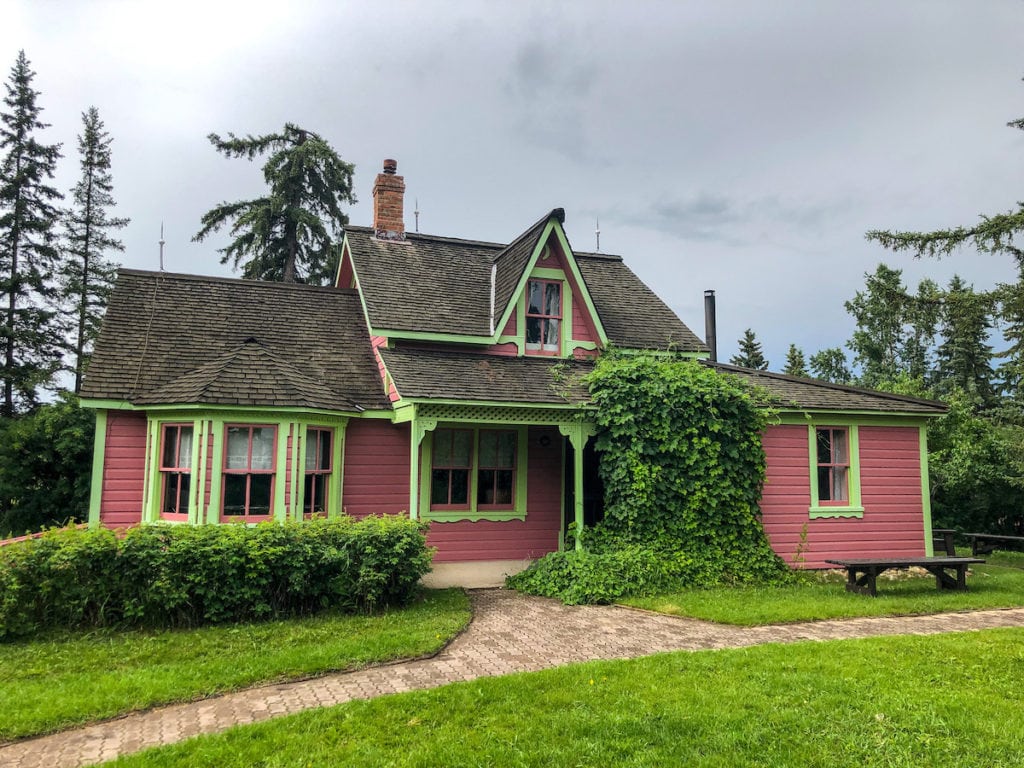 All in all, this road trip loop will take us up to Red Deer, passing prairies and farmland along the way. Then, we’ll head west to Rocky Mountain House where we’ll stay for a couple of nights. Then, we’ll continue west to the Icefields Parkway, and then down to Lake Louise, Banff, and Canmore before returning back home. The total drive time for this loop is about eight hours. Not a bad way to see prairies, historic sites, mountains, turquoise lakes, rivers, canyons, and glaciers eh?

Our first day was a little bit laid back. We had to get our bags packed, get gas, grab some snacks, and make the drive towards Rocky Mountain House. The drive is only two hours but we decided to take a short detour to see the Stephansson House, an Alberta Historic Site that takes you back to 1927. It’s the home of Stephan Stephansson, an Icelandic man who brought his family to Alberta in 1889 and later became known as “the poet of the Rocky Mountains.” Stephansson’s prolific literary output has helped make him one of the greatest poets in the western world. 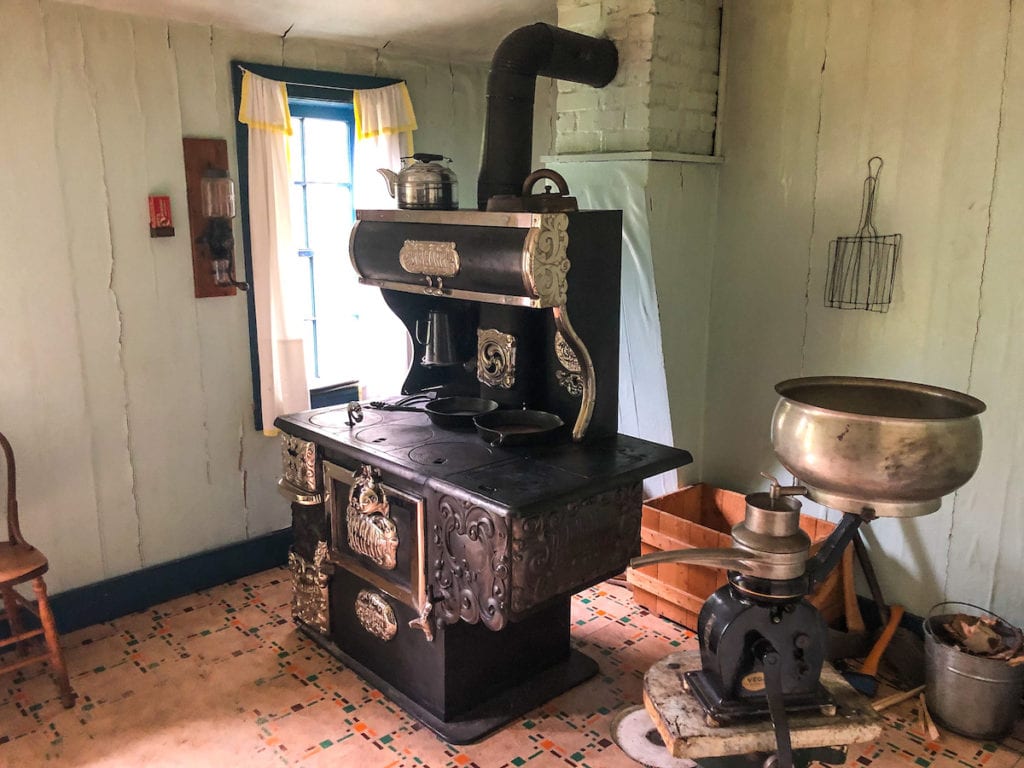 We had never heard about Stephansson before but it was really interesting to learn about him, his poetry, and the way of life back in those times. Plus, it was really cool to step into the house and be transported to the 1920s. This house has been kept very close to its original state, with original furnishings, a wood-burning stove, newspaper wallpaper, and no electricity. It’s really beautiful. There’s even an old record player that still works. Our guide even played us a record from the 1920s!

By the time our tour was done, the site was getting ready to close, so we jumped back in the car and drove to our final destination for the night. By the time we checked in, it was starting to rain, so we drove into town for some supper. We love Asian food and I was surprised to find a few options that had high rankings on TripAdvisor. We opted for Bang’s Sushi Bistro, which serves delicious sushi. Having been to Japan and many other Asian countries, we didn’t expect much but were surprisingly blown away. We had the Dynamite Roll and the Big Bang Tempura Roll. Both choices were very good and we really loved the presentation as well. I never would have expected such good sushi in a small Alberta town, but we’d highly recommend it if you like sushi as much as we do. 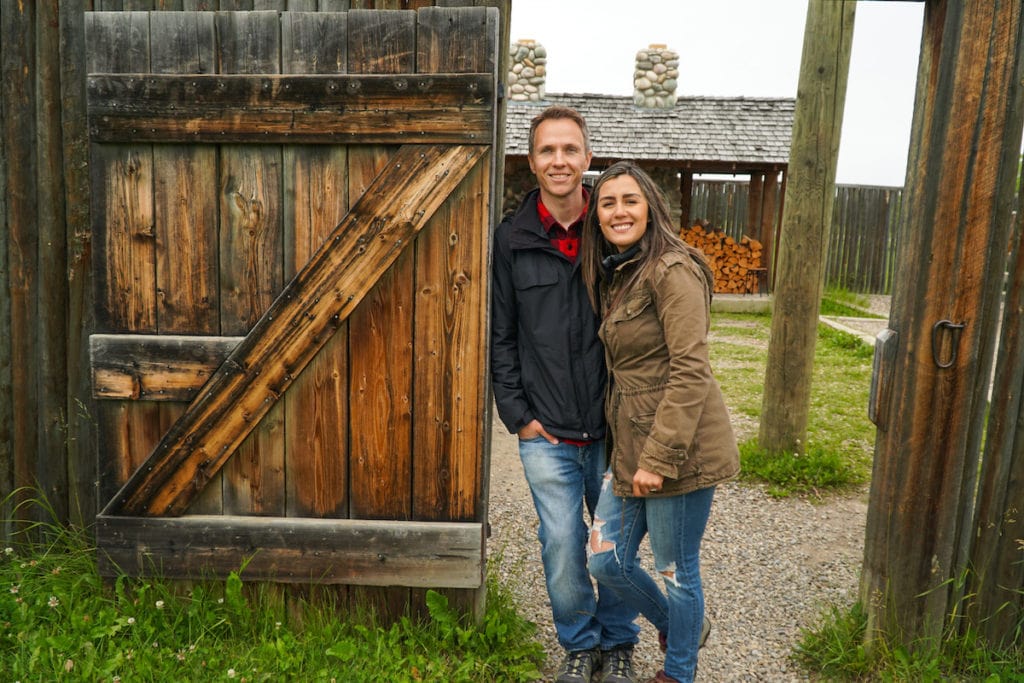 After waking up and enjoying our free Best Western breakfast, we headed over to Rocky Mountain House National Historic Site to learn about Canada’s past with the fur trade. Located along the banks of the North Saskatchewan River, this was the centre of commerce in the west for 76 years.

We started off our visit with the visitor centre, learning about the site, admiring artifacts, and learning about the legendary explorer David Thompson. We even experienced some virtual reality, something I didn’t expect at a historic site. This is a fantastic modern way of getting people involved, especially the younger generations, and keeping them interested in our past. We then proceeded outside to walk the trails at our own pace, starting with some of the archeological sites, some of which still have the original chimney’s. In fact, those are practically the only original things that remained at the site. After all, everything was made with wood and due to both fire and people taking the wood to re-use, nothing really survived.

Continuing down the path, we saw a replica York Boat, which was used to transport goods up and down the river. These bigger boats were very hard to portage compared to traditional canoes but were much more economical due to the size. We then visited the “blacksmith” who showed us how they would have made nails and other tools. 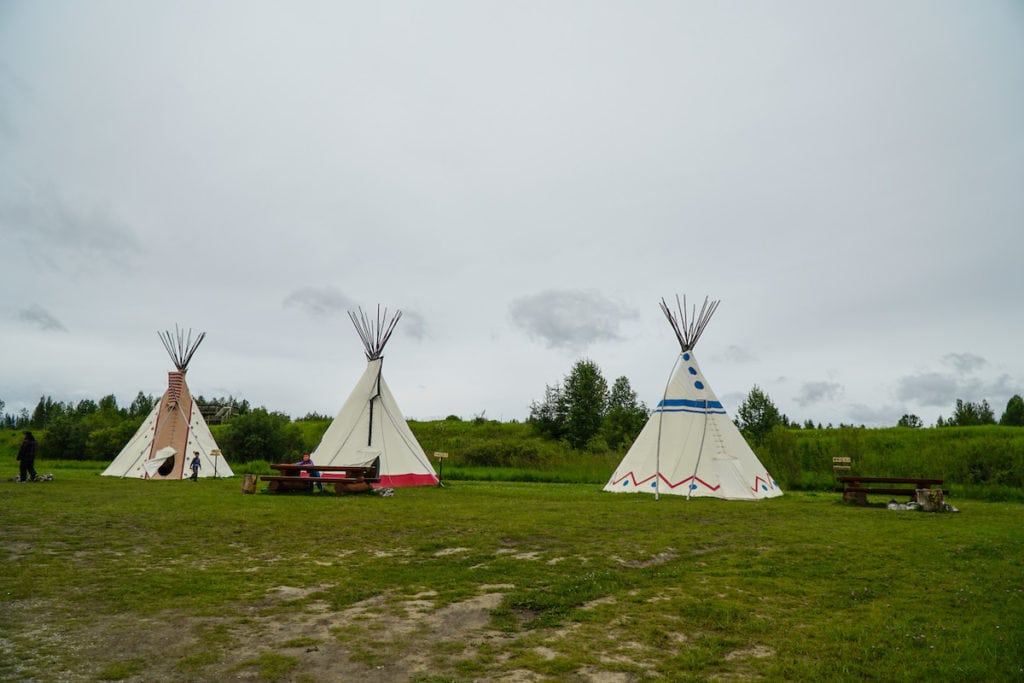 Once we finished with the first side, we went to the other side and visited the Métis camp. Here, we were greeted by costumed actors who gave us a tour of the camp, played the fiddle, and danced with us. It was really interesting to learn about the traditions that came when indigenous ladies mixed with Scottish men. We then tried some bannock and proceeded to the tipi area, where we learned what the bison hunting camps would have looked like. One of the things I learned was that “travelling tipi’s” were often shelled with pine tree branches and didn’t look like the ones we often see today. This was done because the people would have been following and hunting bison and wouldn’t be able to carry heavy materials. It was much easier to just find pine tree branches upon building the camp. Cool, huh?

By the time we finished our dreamcatchers, it was almost the end of the day, so we finished it off by admiring the Bison herd, which roams around various areas of the park. They are such majestic creatures. We’ve seen bison all over Alberta but it’s always great to see them again.

The one thing we wish we would have had time for is the overnight camping. Rocky Mountain House National Historic Site offers a range of camping options, including Indigenous trapper tents, tipis, walk-in tenting, and RV stalls. We had the chance to visit the indigenous trapper tents and it’s really cool what they’ve done. Not only do you get to experience that style of camping, but they also give you a Fur Trade Camp Kit that includes bison hide, a period cooking kit, bannock mix, trapper’s tea, spices, soap, and a flint/steel fire-starting kit. For this alone, we’ll be back!

After a day of learning about history, it was time for some adventure. For our last day, we decided to take the long route, driving towards Abraham Lake, joining the Icefields Parkway from Banff to Jasper, and then making our way down to Banff and back home to Calgary. Our first stop was Abraham Lake where we not only admired the beautiful lake but also visited Rockies Heli Canada, which offers helicopter adventures throughout the year. A couple of years ago, we went on a heli-snowshoeing ride with them but this time we’d be going on a hiking adventure. Words can’t describe the beauty of the Rocky Mountains when seen from a helicopter. They’re beautiful from any vantage point but from the air is incredibly special. We were lucky enough to get the front seat, admiring a variety of mountain peaks and turquoise-colored lakes before touching down in the backcountry for a short hike to a small waterfall. We were even surprised with champagne! 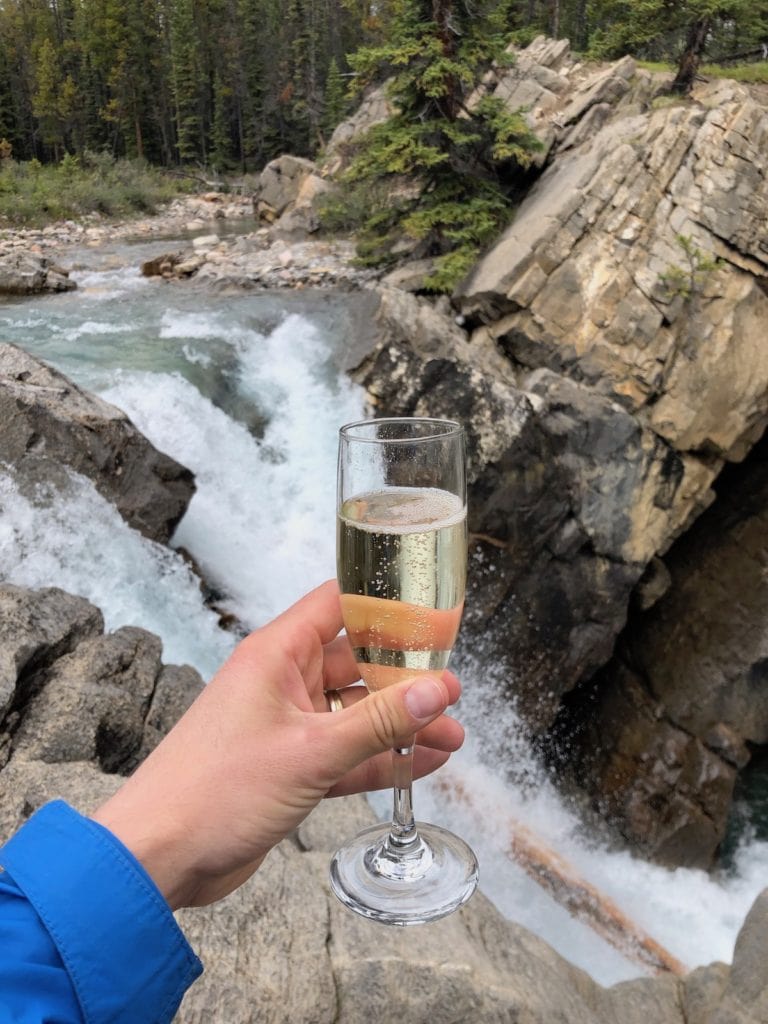 The entire adventure lasted about 1.5 hours and then we jumped back in the car and drove to Mistaya Canyon. However, our drive took longer than anticipated because we drove by four bears! That’s right. Not just one bear, or two bears, or even three bears – four of them! All were foraging on their own. Three were black bears and one was a grizzly. It’s funny how things work. We saw the three black bears first, which was awesome. But then I mentioned that we had never seen a grizzly on the side of the road before. Minutes later, we found one! None of them cared about the car parking on the side of the road. They just went about their business, eating berries and lifting up rocks to find insects. Beautiful.

When we finally reached Mistaya Canyon, we went for a short hike into the forest. This is a really short and easy hike that almost anyone can do. It takes maybe 5-10 minutes to reach the canyon and the same amount of time to get back to the car. The longest amount of time will be the time spent admiring the beautiful river-carved canyon. It really is stunning. 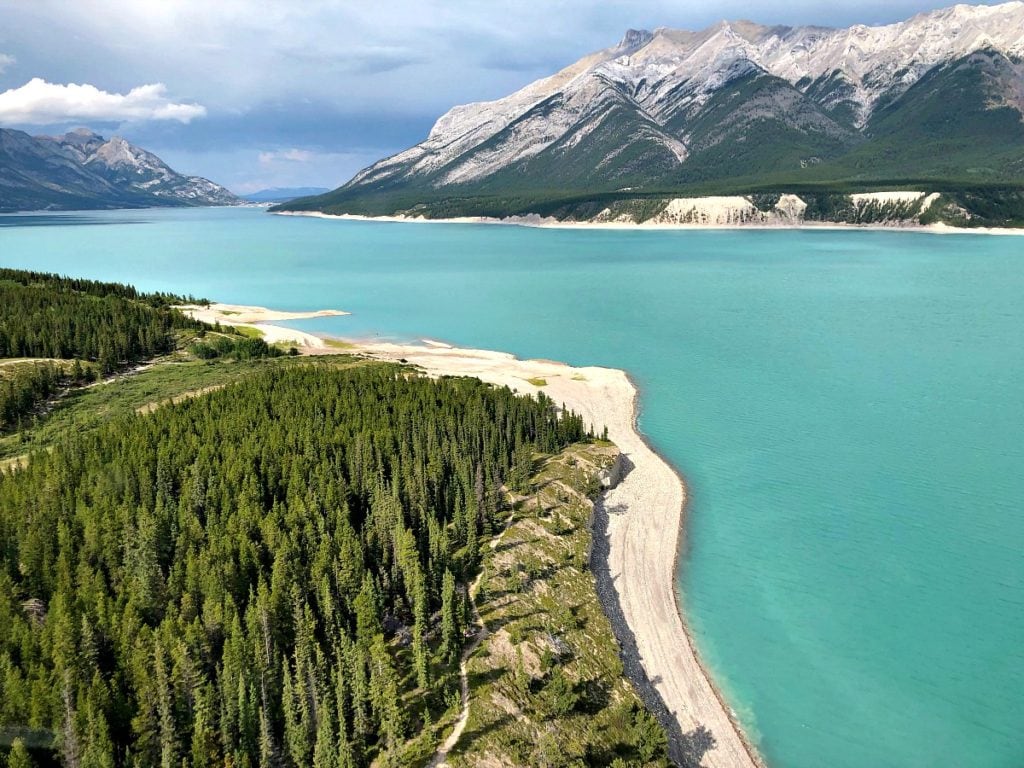 Once we peeled ourselves away from Mistaya Canyon, we continued to drive down the Icefields Parkway, admiring the views along the way. We had planned to do many other short hikes, such as Peyto Lake, but ran out of time. We even had to skip Lake Louise this time around, as we drove straight to Banff to grab some supper before heading home.

There are so many road trip adventures in Alberta and especially around the Canadian Rockies. We easily could have spent an entire week on this same journey, taking more time for various hikes and other adventures. Whether you have a weekend or a week, we hope we inspired you to create your road trip adventure to Rocky Mountain House and beyond.

For more info on this area, you may like: 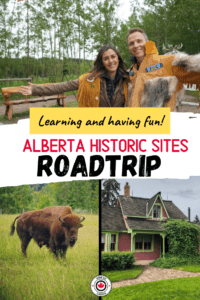