Ahhh… the Okanagan Valley. It’s a 160-kilometre long narrow stretch of sun-drenched paradise with long lakes, rolling mountains and plenty of heart-pumping, spirit-sipping, 100% Canadian good times. When friends asked if I wanted to join them on a three-day adventure exploring Penticton, B.C. by pedal and foot, I jumped in.

Day One – Adventure On

Known for its rock climbing at Skaha Bluffs and endless water sports on Okanagan and Skaha Lakes, Penticton also has a myriad of cycling opportunities that branch out beyond the popular Kettle Valley Railway (KVR) Trail. Day one of our trip started with an introductory, round the mountain biking loop at the Campbell Mountain trails. Shooting stars, Saskatoons, and Arrow-leaved Balsamroot bloomed in profusion on grassy slopes draped in towering ponderosa pines. We huffed and puffed… okay, I huffed and puffed… while the others sped on up to the city overlook. From there we climbed up to the summit and flowed down the backside, past the gulch and back to the parking lot – a perfect 10-kilometre introduction to Okanagan mountain biking. We also passed a couple of people hiking the same route.

While the Naramata Bench is renowned for its vineyards, we drove past them all to stop in at Legend Distilling to toast our ride with a sampling of their liqueurs and spirits. I savoured Doctor’s Orders – gin-flavoured with local ingredients such as apple, elderberry, and lavender. The Slow Poke Sour Cherry Vodka was also popular, but hands down the group favourite was Manitou. Locally harvested sumac berries are blended with orange flavours for this magical spirit. We ended up buying a bottle and splashing it on vanilla ice cream for dessert several nights in a row.

Penticton comes from an Interior Salish word snpintktn, which translates as “a place where people live year-round.”

You could bike a different trail every day, but a solid option is to step off the bike and sip a latte at The Bench Market before wandering on foot through Penticton’s downtown. The visitor centre has a walking tour map outlining local heritage buildings. I’m always on the lookout for stories of the past and heritage resources are visible ties to the history of an area.

You can’t miss the S.S. Sicamous, permanently beached on the southern shore of Okanagan Lake at the end of Lakeshore Drive. This paddle wheeler is the most obvious and tangible connection to Penticton’s past. Built for the Canadian Pacific Railway in 1914 in Port Arthur, Ontario, it was shipped west in pieces on the railway to become a centrepiece of transportation on the lake. Head west along Lakeshore Drive and you’ll find the Warren House boasting a Georgian Revival style of architecture. Built for the president of the Kettle Valley Railway in 1912, it offers a glimpse into the grandeur of this part of the city in its early years.

Turn south on Winnipeg Street for the home of David Riordan. A prominent hotel owner, Riordan reportedly hid liquor in the basement of 689 Winnipeg Street during Prohibition. Today, the home’s enduring opulence belies the notoriety of its past owner. Head east from tales of bootlegging to 112 Eckhardt Avenue. This large corner lot holds the Gibson House. One of the oldest surviving homes in the city, it was built for Frank H. Latimer in 1906. Latimer was the civil engineer who surveyed and planned the city of Penticton. The home’s current moniker comes from Dr. John J. Gibson, another respected civic leader who lived here from 1946 until 2000.

The final must-see on my list is the Leir House at 220 Manor Park Avenue. Now the home of the Penticton and District Community Arts Council, it was the home of successful lumber magnate Hugh Leir, his wife, and their 11 children in the late 1920s. The thought of that many kids is enough to drive me to drink!

With five craft breweries in town, this afternoon’s beverage of choice is clear. We settled in with a tasting flight at the taproom in The Cannery and were soon munching happily on the best nachos we’ve ever had (their spiced jalapeño sour cream drizzle is simply amazing) while toasting our day. Growler to go, anyone?

Actually, there were four of us on this second day of riding, but the mountain biking trail system we chose to explore was indeed called Three Blind Mice. I’m going to say, straight up, that I was not thrilled with a little unplanned air time. The bike went right, I went left. There are dozens of trails on this rocky hillside system. Some – like the one named Fred, in my case – are more difficult than others. Beginner riders might want to start with Chipmunk. It climbs gently onto a bench and flows along through woods and grasslands before dipping back down to the KVR.

Regardless of which trail you ride (or walk), there’s plenty of spirit waiting for you at the bottom. The Naramata Bench boasts in the neighbourhood of 60 wineries. Today’s choices were two of my favourites, Elephant Island and Ruby Blues. I love both for their wine, but Elephant Island caught my attention on my first visit because of the story behind the name. A “white elephant” purchase in the 1970s by an architect and her husband led to plenty of discussion on how things should be developed. The architect’s eye for the land quickly became the nickname, “eye land.” Elephant Island Winery was established in 1999. Ruby Blues caught the other side of my creative spirit – with its funky décor and splashy VW buses. I couldn’t resist picking up a bottle of their signature, easy-sipping Red Stiletto!

No matter what your activity or beverage of choice might be, Penticton seems to have it covered! The same can be said for day’s end when you’re looking for a place to lay your head. I’ve spent time exploring Penticton on three different occasions and stayed in three very different styles of accommodation, but they all had one thing in common – spectacular water views! If you go, check out the low budget Wrights Beach Camp for awesome camping in Penticton, medium range VRBO options, or upper-end Penticton Lakeshore Resort.

Kelowna to Penticton is less than a 1-hour drive. 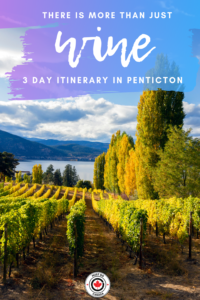 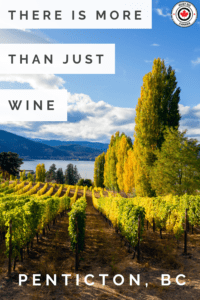