I’ve been riding mountain bikes ever since I was a kid but this was the first time I rode one down an actual mountain. For those looking for a mountain-rush during the summer, I can’t think of a better way. For me, going downhill with a bike versus ski’s is much more terrifying…but I was up for the challenge.

First, my wife Karla and I wanted to see Boo, the resident Grizzly bear. Since Karla wasn’t going to be joining me for the mountain biking, we decided to explore the Grizzly refuge in the morning. Plus, this is when Boo is more active. I don’t blame him. With 25ºC weather and a thick fur coat, I wouldn’t want to be under the sun either. 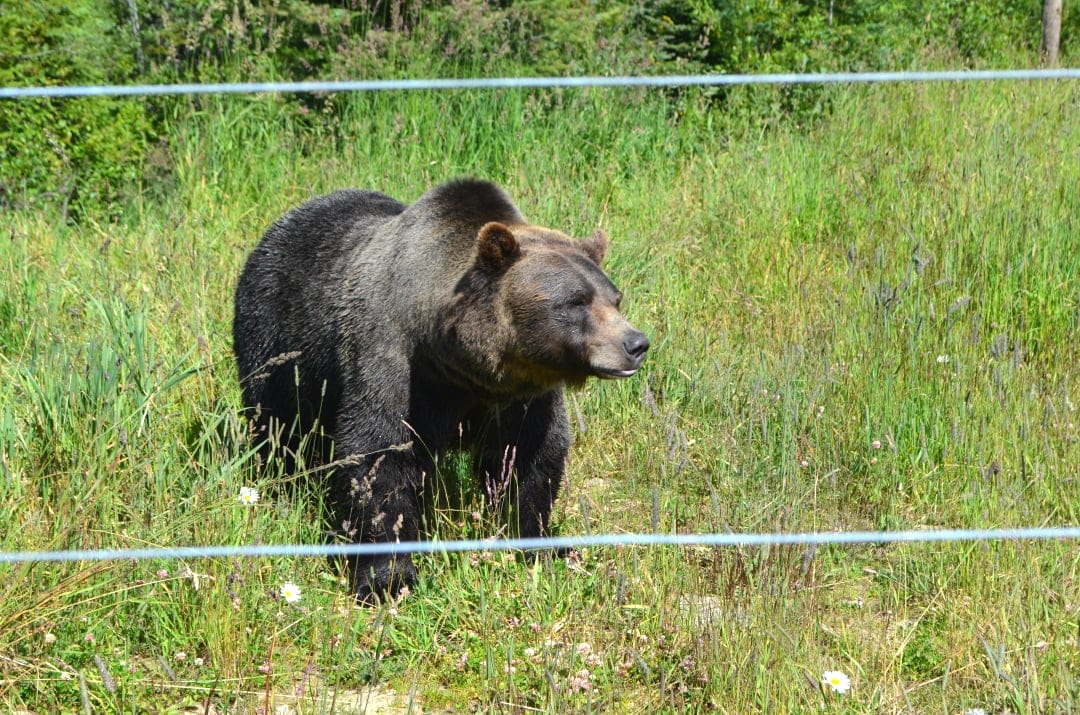 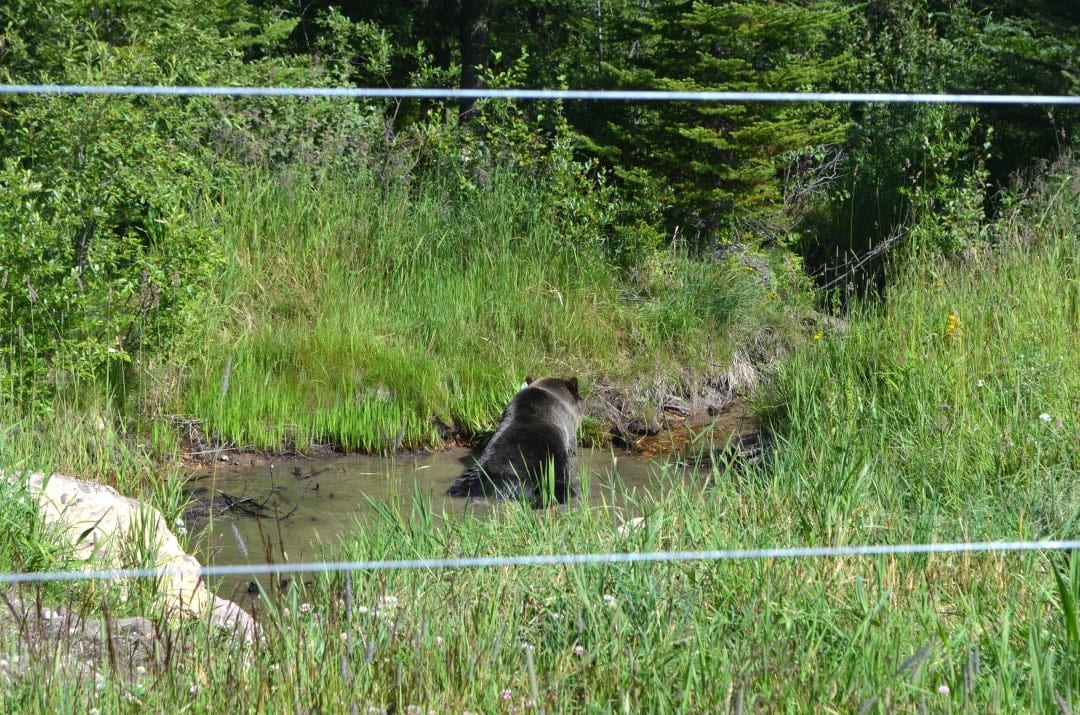 The first tour starts at 10 AM. As soon as we had our lift tickets, we jumped on the chair lift and headed up for the guided tour. You don’t need a guide but it’s a great way to learn about Boo and Grizzly bears in general. Plus, Boo is used to the guides and hangs around more when they are there.

As soon as we arrived, the talk had begun and Boo was out looking for food. I find it incredible that Grizzlies like Boo are mostly vegetarian and still manage to get SO BIG. Until now, I had never seen a Grizzly this close. I did run into a black bear once while jogging but that’s a different story. It was exciting to see Boo foraging around the bush and it was also comforting to know that an electric fence was separating us. Boo is an orphaned bear whose mother was shot on the highway by a poacher more than 11 years ago. Boo was just six months old at the time and would not have survived on his own so after a series of events, a 20-acre refuge was built at Kicking Horse Resort just for him! How awesome is that?

After watching Boo forage for an hour or so, he decided to jump in his pond and cool off. We watched him splash around a bit and then we took the chair lift back down so I could grab my mountain bike (rented from Kicking Horse Resort) and begin my downhill adventure. 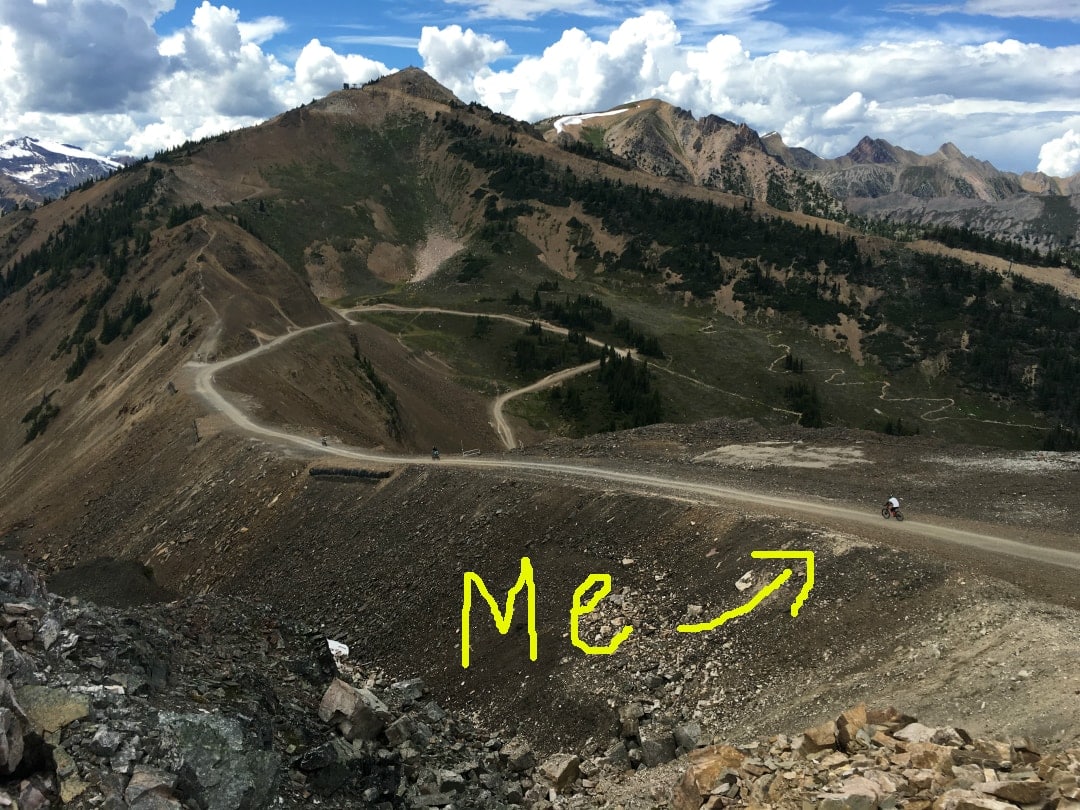 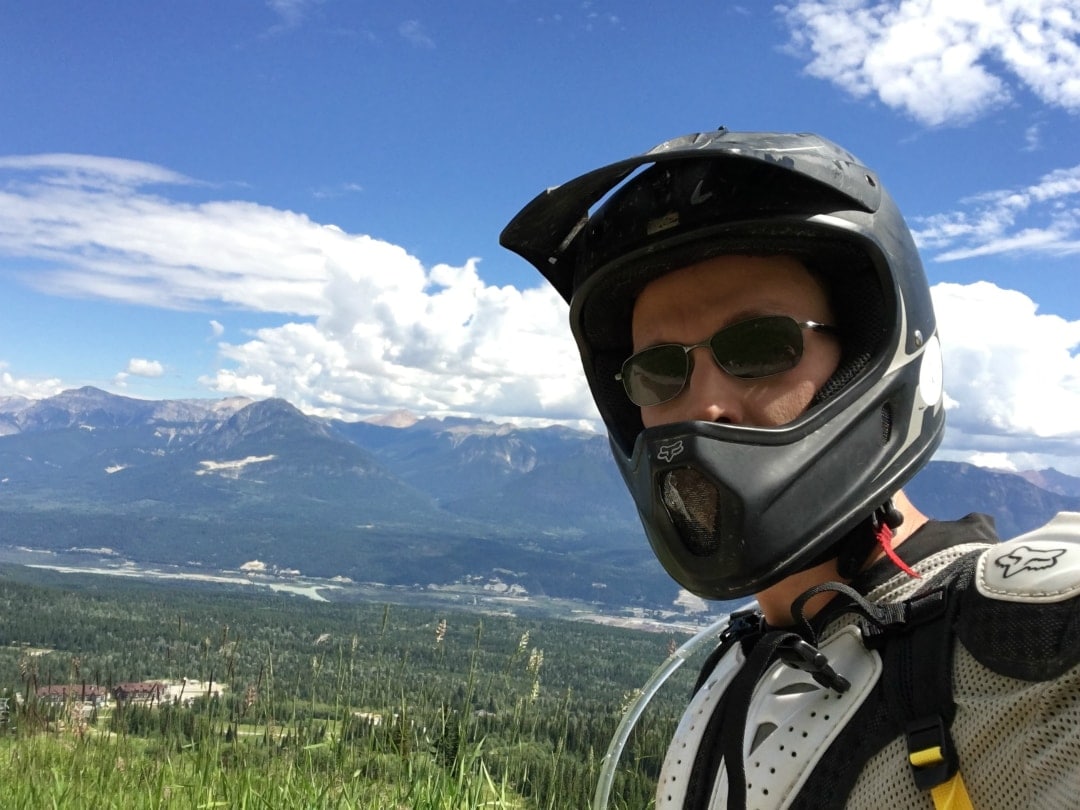 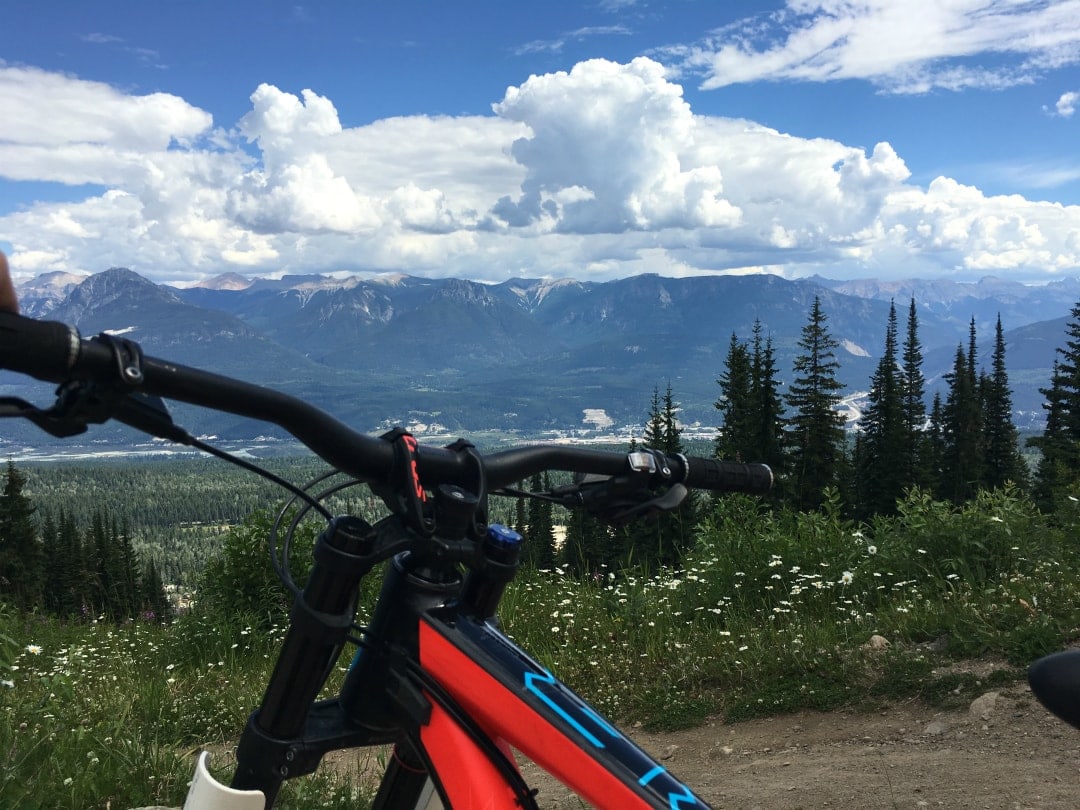 As a first timer, I started with the green runs, which brought me down thin dirt tracks that snaked around the pine-tree forest. I took it quite slow at first but once I got comfortable, I had more fun by cutting corners as quickly as I could and taking some very small jumps. Once at the bottom, I decided to take the gondola to the summit to see what that was like. Even though there are only blue runs from the top half of the mountain, I didn’t think they’d be much harder than the green. I was wrong. For avid mountain bikers, I’m sure the trails I took were a piece of cake, but for me, it was hair-raising. Instead of crashing into the rock and rubble, I decided to take it very, very slow. Eventually, I just took the main dirt road down the mountain until I reached the easier green runs again. The main road is much wider and less scary but still provided me with beautiful views of the surrounding area. Once I found the green runs, I pretended I was a pro and went cruising down the mountain. 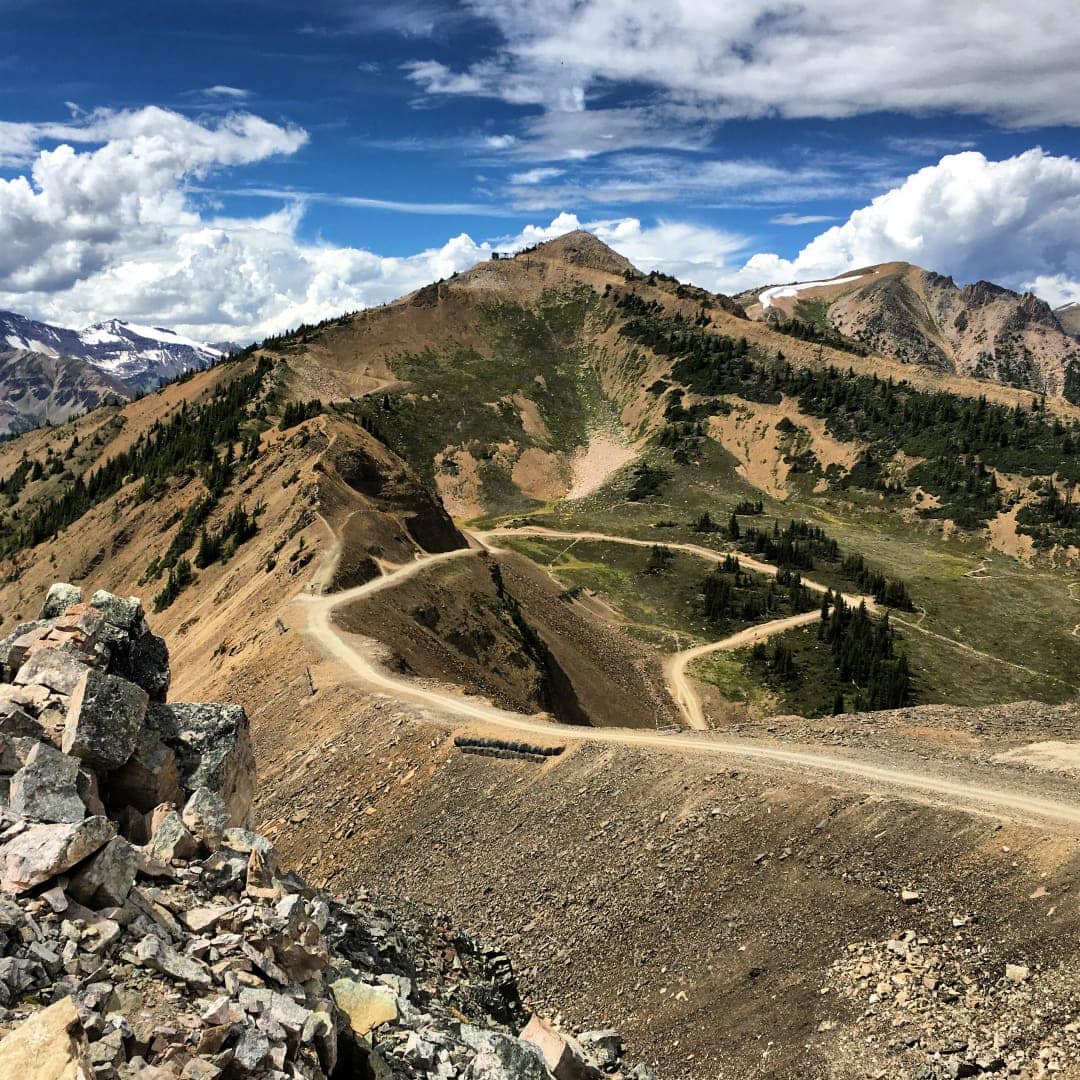 Overall, I had a blast and was disappointed that by the time I reached the bottom, it was 4:20 PM and the lifts were now closed. I really would have loved to do another run and build up my confidence. Then again, it just gives me an excuse to come back!

Have you been mountain biking before? Would you do it?

For more info on Kicking Horse Resort, visiting their website at http://kickinghorseresort.com.

If you’re looking for a place to stay, I recommend the Glacier Mountaineer Lodge, which is right at the base of the gondola! Talk about location!

TIP: I had a lot of problems during my ride due to me wearing glasses. Thanks to the rough terrain, they wobbled a lot, which caused my vision to become distorted. Lesson learned: wear contacts. 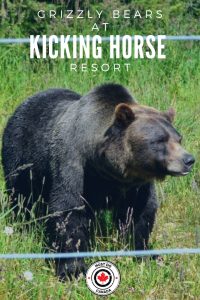 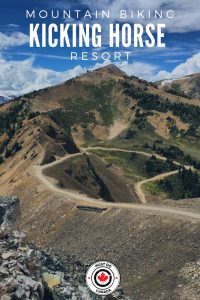