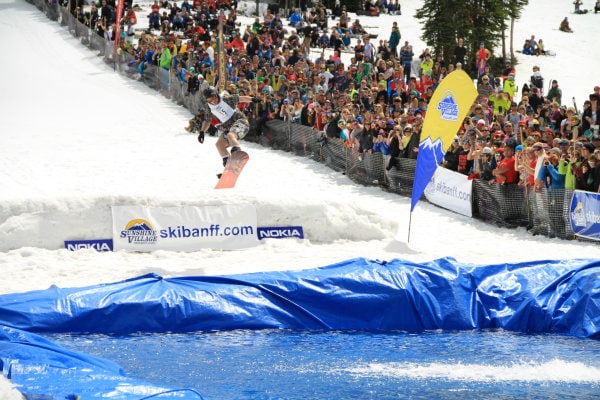 It was a beautiful day to be outdoors. Sunshine, blue skies and +20 degree weather. Some people went camping. Some people had a BBQ. We (and thousands of others) went skiing at Sunshine Village near Banff, Alberta. It wasn’t a typical ski day either – It was the 85th anniversary of Slush Cup.

Slush Cup is a special time of year. A celebration of springs arrival and the last day of lift-ticket skiing. It’s a day when people from all over come out dressed in their silliest costumes (or bikinis) to watch or take part in the annual celebration, which consists of 65 competitors skiing or boarding down a hill, off a jump and into (or across) a 30-meter-long, 2.5-meter-deep pool of ice-cold water.

Crazy? Perhaps…but there’s no shortage of people signing up to do it. I was one of those crazy souls who wanted to compete but unfortunately didn’t make it in time for registration. Those eager to compete must be at the top of the mountain by 8AM (preferably earlier) to line up and hopefully be part of the 65 people who ink their name to the list.

You don’t have to belly-flop yourself into the pool to have a good time though. Plenty of people come up just for the party while others take advantage of the last time they’ll strap their skis on for the season. It’s likely the most unusual day you’ll have at a mountain resort. You’ll ski past Oscar the Grouch or the Cookie Monster or forget your on a ski hill as bikini-clad babes glide past you on one of many runs. 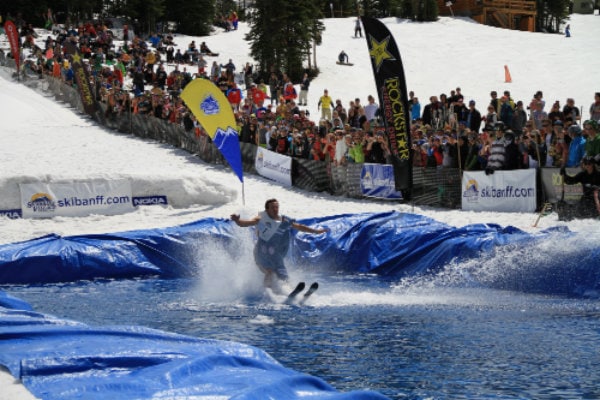 By the pool, you’ll find people enjoying their favourite beverages while a band plays chilled-out tunes while the pool is being filled up with water. On this particular day, the snow was getting quite sticky as the sun got stronger, which made it hard on the legs when making way down a run. I noticed some people were taking the chairlift in shoes, going up just to see the absolutely magnificent views that Sunshine resort offers.

After a couple hours of skiing, my fiancé and I went down to the main event to see what this year’s slush cup would bring to the table. After the first 10 participants made it down the hill, at least 7 made it right across the pool, as if they were water skiing on a lake. I had never seen this many people clear the pool before so they must have been practicing for quite some time. Just when we thought there would be no wipeouts, one of the guys did a nasty belly-flop after taking the jump at a slower speed. More wipeouts followed and in good fashion with skis flying all over the place and the sound of bodies hitting the water like that of a beaver tail. It sounded painful but everyone made it out okay.

Prizes were awarded for biggest splash, best costume, biggest air, Mr. Slush Cup and Mrs. Slush Cup. All awards were much deserved. Surprisingly, there were only four female competitors this time around. C’mon ladies! 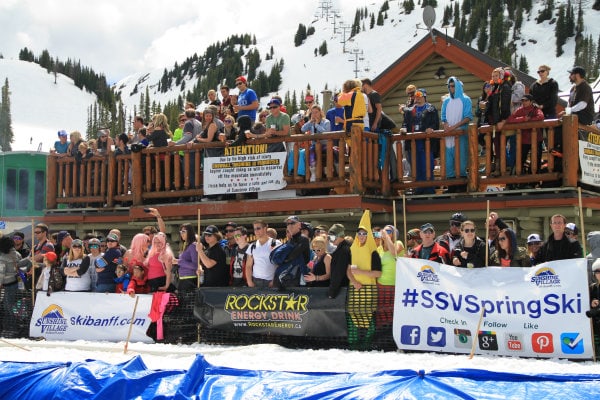 When all was said and done, we bid farewell and jumped aboard the gondola to make our way down to the base of the mountain. As the gondola moved along the line, we were amazed at how quickly the snow had melted. Just three weeks ago was prime skiing conditions and now the ski-out run was being driven down by trucks. As tired as we were from the day, we looked out through the gondola windows at the stunning scenery around us with birds singing in the background and realized just how special Sunshine Village really is at any time of the year.

If you happen to be in Banff around the third weekend of May, make sure you make it up to Sunshine Village whether or not you strap on the skis or a snowboard. Not only will you experience some of the worlds best scenery, you’ll also get to experience the one and only slush cup; something that truly shows how crazy we Canadians truly are.

For more things to do in Alberta, click the link.

All photos Credited to Sunshine Village Ski and Snowboard Resort.