Situated in one of the most beautiful national parks in the world is Mount Norquay, an amazing mountain for skiing and snowboarding. Known as one of the mountains where olympians train, it’s also the closest and smallest ski area to the town of Banff.

But when most people think of Mount Norquay or with any of the mountains for that matter, thoughts of skiing and snowboarding are the only things that typically come to mind. That’s the only thing I ever thought about when visiting the area during the winter time… 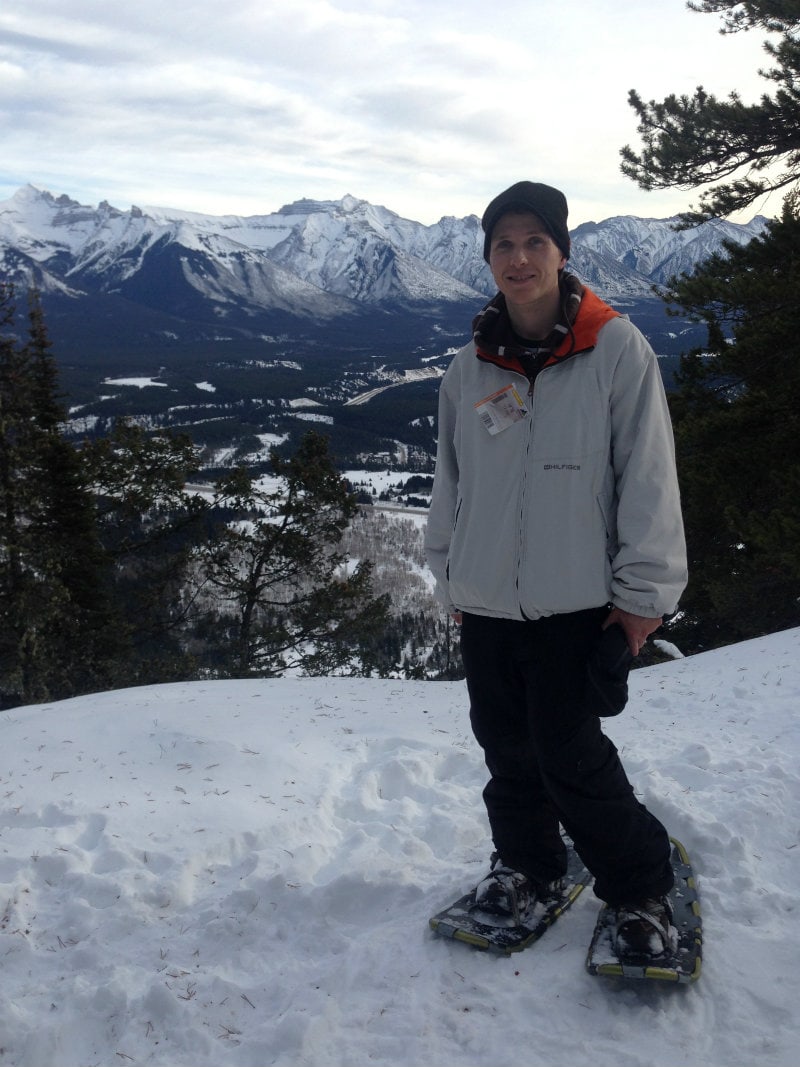 Last weekend, Norquay invited me over for some snowshoeing and tubing. I had never been snowshoeing before and I hadn’t been tubing since I was a little kid. Needless to say, I was excited.

We pulled up to the resort around ten in the morning. The sun was already out and the temperature was quite nice. A mild winter day with only a slight breeze. We walked into the office and grabbed our snowshoe rentals. The recommended trail was technically outside of the resort area but offered a beautiful two-hour return hike on a narrow trail surrounded by snow-covered pine trees.

The snowshoes were surprisingly easy to use and didn’t feel much different than a normal hiking boot. The biggest advantage was the metal spikes on the bottom, which helped grip into the snow. After about half an hour of walking through winter wonderland, we made ourselves a seat in the thick snow next to a huge pine tree. We nestled into the powder as if it were a recliner and ate some chocolate we had leftover from our Christmas stockings. 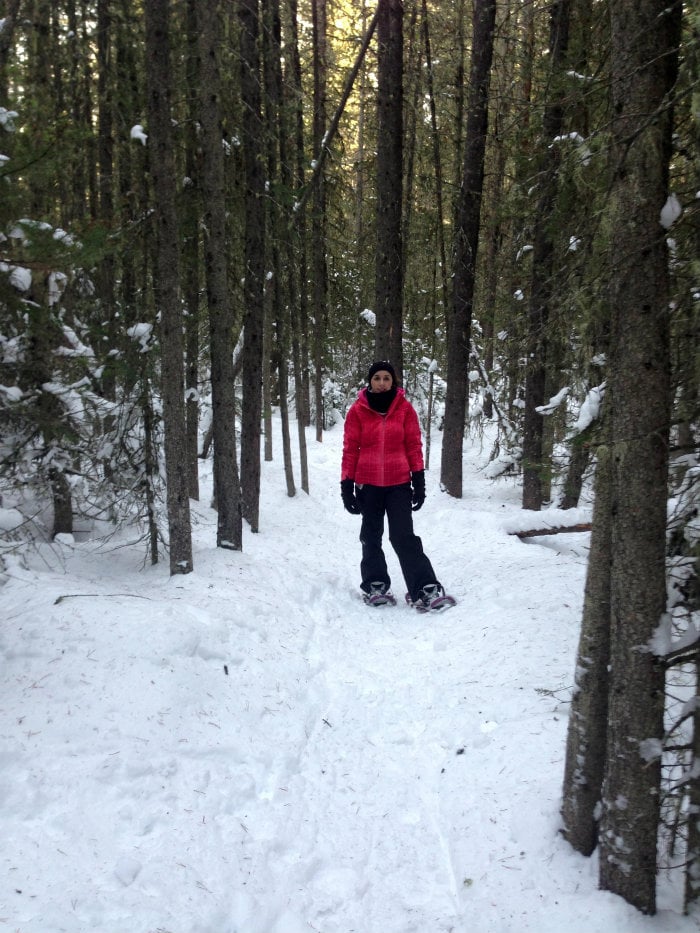 After a brief break and some much needed chocolate energy, we continued up hill until we finally reached an opening in the forest that exposed a beautiful view of Banff, Alberta. No matter what view you stumble across in this national park, it’s bound to make your jaw drop.

We snapped some pictures and posted them to Instagram before continuing down the trail, past a cliff of mountain rock as we made way to the end of the trail. Before we came to the end, we stumbled upon a little squirrel, munching away on a pine nut of some sort. As animal lovers, we watched him for a little while and then made way back to base. Karla loves the white snow, especially since she grew up without it in Mexico, so we decided to stop when we found fresh powder that we could make some snow angels in. 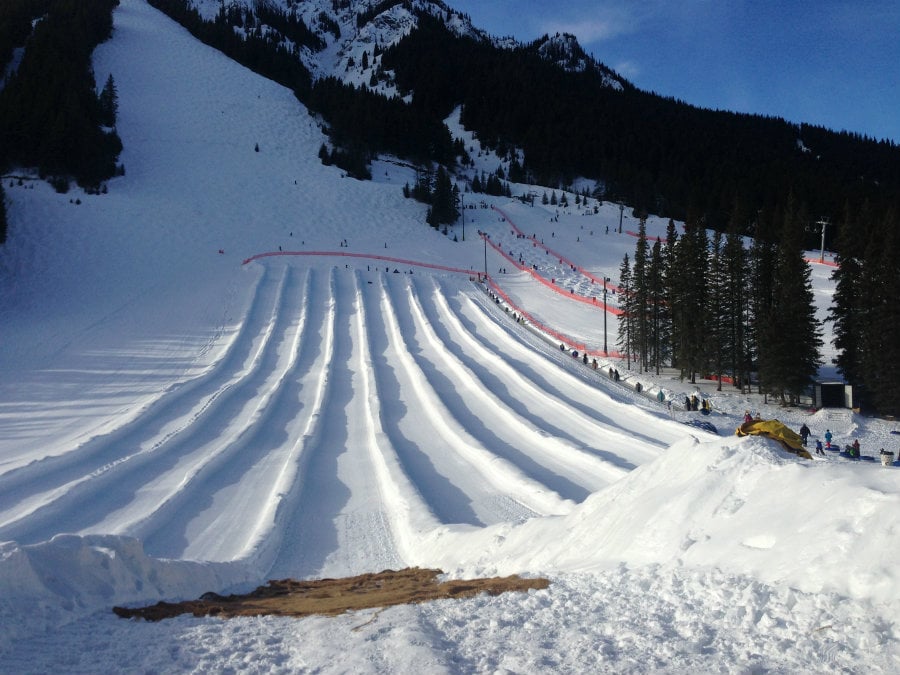 It had been a while since I last hiked and my legs were feeling it. Luckily, the next activity was tubing, which didn’t really require any strength. We returned the snowshoes and made way to the tube park where we felt like kids again. Actually, the tubing was incredibly fast and almost scary as your soar down towards the bottom. It’s amazing how fast you really go. For the first couple of runs, we went together by holding onto each others tubes. The tube park staff asked if we wanted to spin, which we thought we’d try out. As they spun us down the hill, we giggled like kids. I thought I was going to lose my sunglasses once the speed picked up. After ten seconds or so, the hill goes up onto a carpet that stops you pretty softly. We went again and again, flying down the mountain around nine or ten times.

Reluctantly, we gave back the tubes and took the advice from some of the staff to take the nearby chairlift up to a lookout point.

What a view it was! 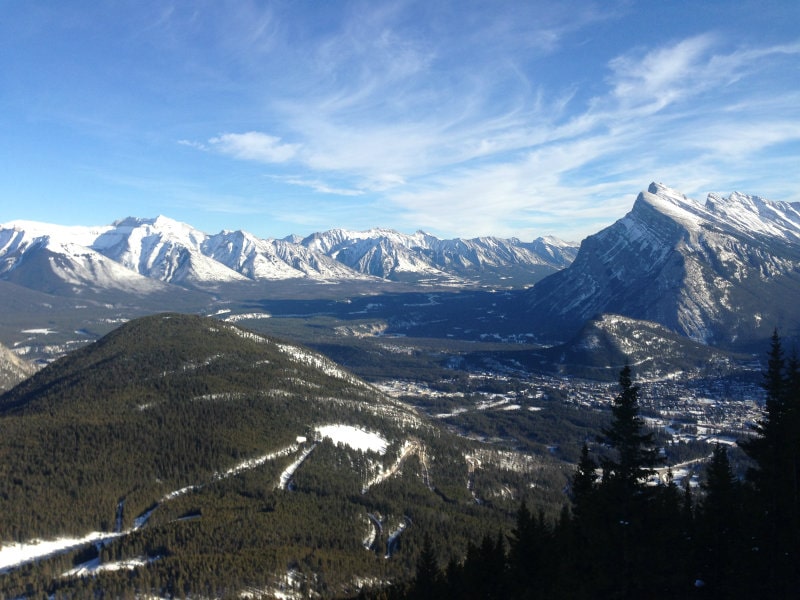 One of the tourist draws in the area is the Banff Gondola, which takes visitors up to a platform for amazing 360 degree views of the surrounding mountains and valleys. This view however was also magnificent and included in the lift ticket. Even if you’re just visiting the tube park, it’s worth it to grab the camera and head up the Norquay chairlift for some incredible views of the surrounding scenery.

All in all, our day was fantastic and I was happy to learn that there were other activities besides skiing and snowboarding. For those visiting the area who don’t ski or board, I highly recommend snowshoeing or flying down the hill on a tube. Both activities are great for people of all ages and finishing it off with an unbelievable view is icing on the cake.

To see more of what Mount Norquay offers, visit their website at banffnorquay.com

Does this look fun? Have you been to Banff, Alberta before? Let us know in the comments…