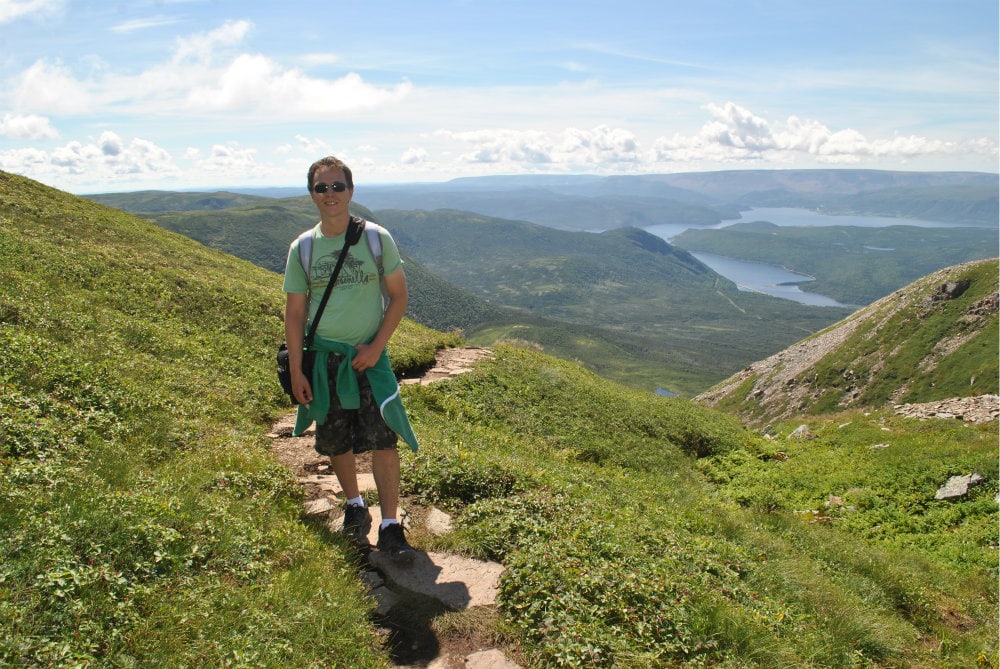 It surprises me that after visiting Newfoundland more than a dozen times, I had never hiked their treasured UNESCO World Heritage site. When I look back though, I was never as adventurous as I am now. With a curiosity and passion to visit the most beautiful places on earth, it was without a doubt that I would hike Gros Morne National Park on my latest visit to the rock.

Located on the West coast of Newfoundland, Gros Morne is the provinces second tallest mountain, standing tall at 806 m. Created from eroded remnants of a mountain range formed more than 1.2 billion years ago, Gros Morne is an exquisite and rare example of continental drift, a process where deep ocean crust and the rocks of the earth’s mantle are exposed.

In other words, it’s gorgeous and educational. 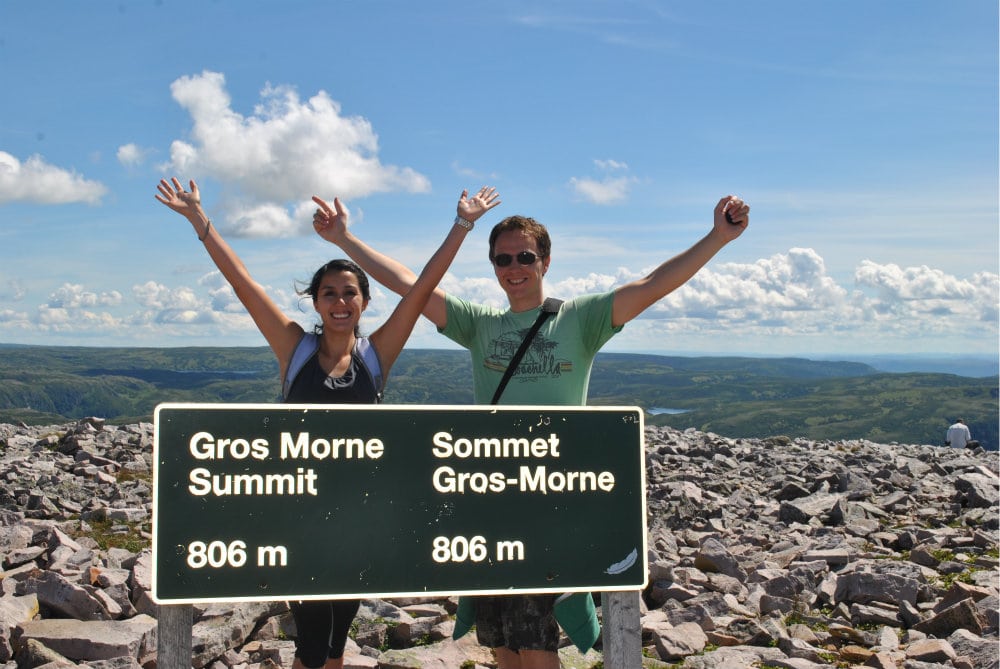 We were lucky to arrive on a hot sunny day, something rare in this “neck of the woods”. After purchasing our park ticket and getting some great advice from one of the friendly park rangers, we headed to the base of Gros Morne mountain to prepare for our climb. We packed plenty of water, some protein bars, and fruit and of course, a good camera.

The beginning of the climb was nice and shady with the trail taking us over freshwater streams and plenty of vegetation. We also took the time to read some information signs, where we learned that …

After an hour or so at a slight incline, we finally hit the real stuff. A big pile of tumbled rocks. This is the trail up. It takes about 1.5 hours and steady feet, as this is a prime area for breaking an ankle. There were a few other people on the trail consisting of families, a couple of seniors and even a couple with their dog. The kids seemed to fly up while many others had to stop for multiple breaks.

As we climbed higher, we noticed a bunch of people seemed to be stopped and looking towards the few bushes that existed this far up. We were surprised to find out that they were staring at a moose. Were we so involved in the hike to miss such a creature? Man.

Anyways, it was awesome. We got up close and personal with a young moose. Probably a “teenager” if that. We were so close that we were both amazed that it didn’t run off. He didn’t seem to mind having his picture taken as he foraged on what was available. 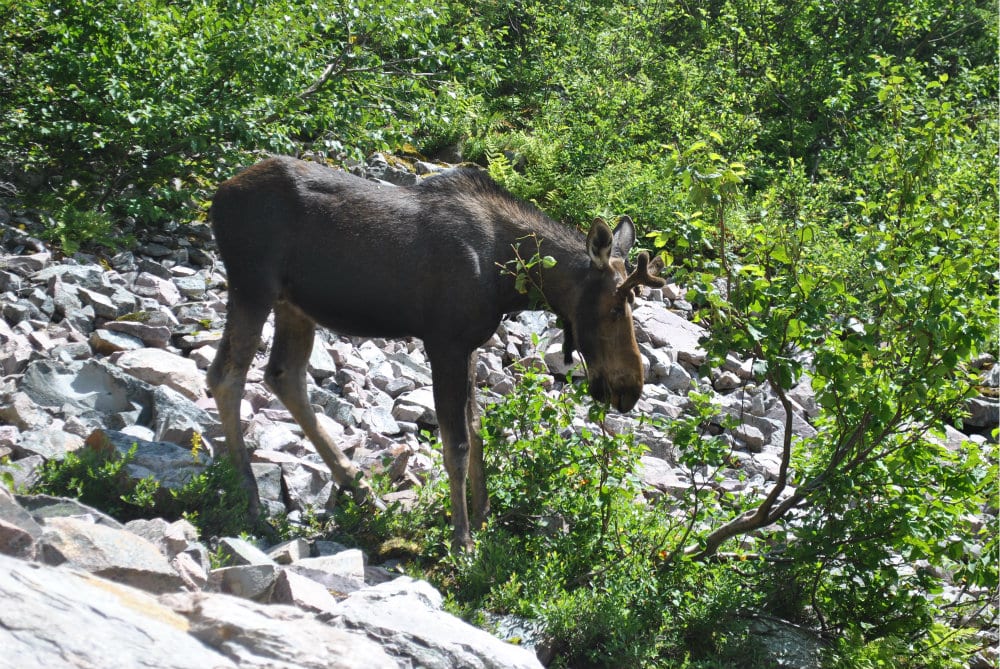 I had no idea that Moose would come this high.

After another half hour of a steep incline, we finally made it to the top. We stopped to have a snack and enjoy the marvelous view in front of us. I love views. No matter where I travel in the world, one of the first questions I ask locals is “Where is the best view of the area?” I find them magical.

As we continued over the mountain, stopping only to have our picture taken with the elevation sign, we came across an even better view. A beautiful river that snaked itself around the inlet of mountains and directly out into the Atlantic Ocean. It looked so dark and majestic. We sat for a good half hour as we gazed out over the cliff.

Finally, we left. Not because we wanted to but because others wanted to snap some pictures as well. As we worked our way around the mountain, we got not one surprise but two surprises. 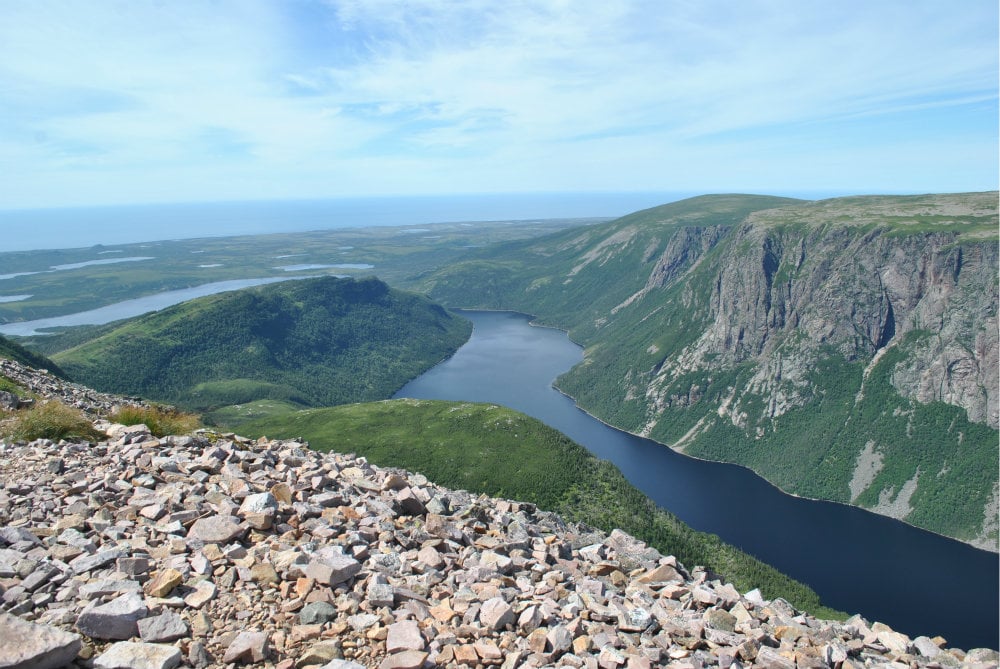 A male and a female and quite possibly, the parents of the young one we had seen earlier. They were both about 50m apart digging into what little vegetation stood at this elevation.

Why were they up so high? Surely, it was to have their pictures taken.

Wildlife always makes my trip. I can be standing in a relatively boring area minding my own business but if I see a garden of butterflies or even two dragonflies getting it on (this happened in Laos), I’ll remember it forever.

What a day for a hike. Beautiful blue skies and a bright sun shining down on us. Absolutely stunning views and three moose to top it off.

As beautiful as it was, we were also delighted to finally make it to the bottom. It took about 6 hours and man we were we tired. This was our first hike in many months so our calves just weren’t used to it anymore. But I’m super glad we did it and would highly recommend it to anyone visiting Newfoundland. 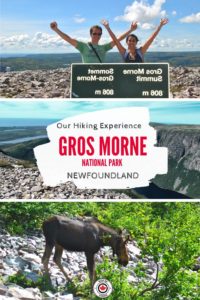 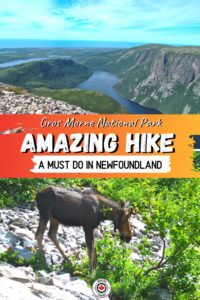