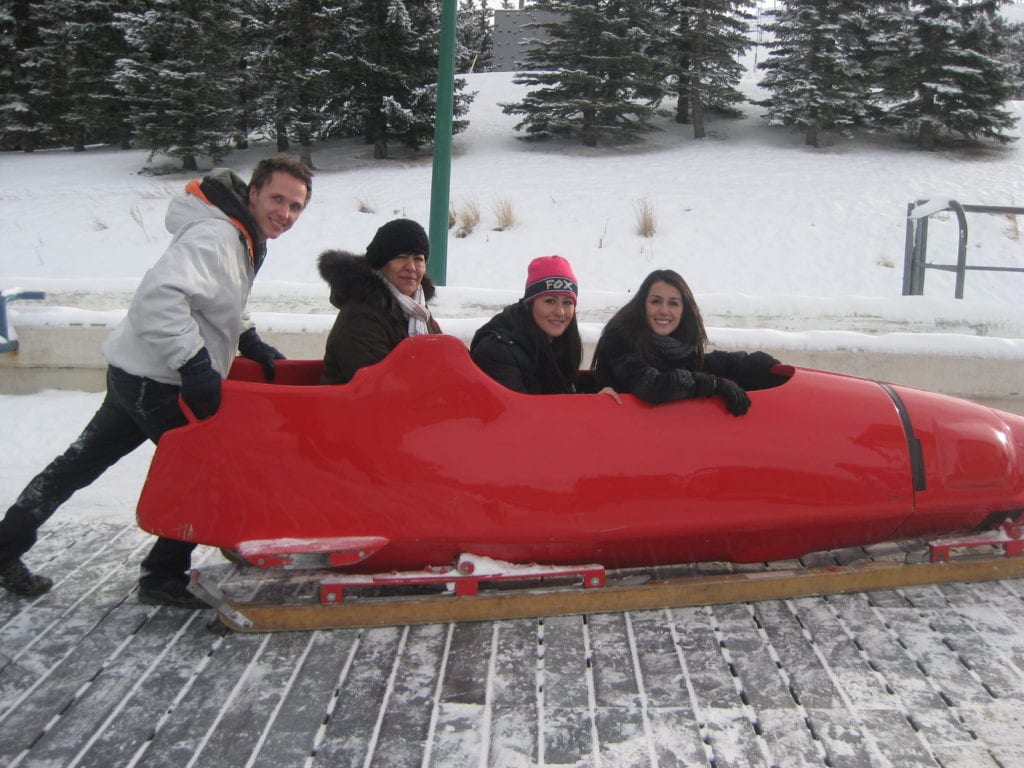 Last week, I had the opportunity to feel like a bullet. Nestled inside a black Olympic 4-person bobsleigh, me, my fiancee, another lady, and Canadian winter Olympic silver medallist Helen Upperton (our driver) went soaring down a 1500-meter ice track at more than 120 km/h.

It was a crazy feeling. A rough one as well. The air was a crisp -25 Celcius and while most people were indoors drinking hot chocolate, we were getting ready to pull 5 G-forces of pressure while trying to keep our heads tucked into our shoulders like a turtle.

We arrived at around 1 PM to fill out the needed paperwork and find a suitable helmet. I made sure to find one with a shield as wind gusts don’t feel so nice when your moving faster than 100km/h. Once this was done, we waited our turn before walking out to the beginning of the track. My heart was beating faster as the excitement and anticipation built up inside me. We listened to some instruction from our driver Helen, sat tightly inside the sled, grabbed the rope inside the bullet, and shrugged my shoulders as I prepared for immense forces to be exerted on my body. 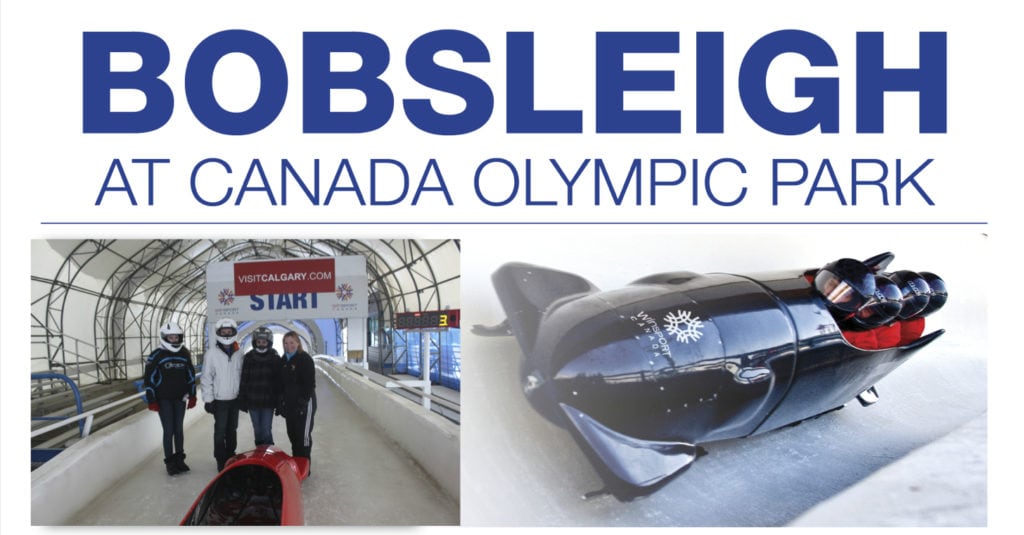 Even if you think that 120 KM/H is crazy enough, try factoring in the fact that our bodies pushed 5 G-forces. This is absolutely nuts. A space shuttle on launch is just 3 G-forces. I had to sit in the back as I was bigger than the three ladies joining me. This is where most of the force is felt (so I was told) so I knew we had a wild experience coming. As the bobsleigh staff pushed us towards the frozen waterslide, I tried to envision what this was about to feel like.

Would it be very rough? Would I get to see us going through the tunnels while seeing white streaks like a spaceship shifting into warp speed in a Star Wars movie?

Well, I was right about one thing. It was rough.

Starting off, it’s a nice calm speed and enjoyable enough to kind of look around and smile. As we entered the second turn, the speed picked up. By the time we reached the third twist, we basically hit full speed. At this point, I’m more focused on keeping my head in the sled. We hit turn after turn while sometimes hitting a right turn immediately after a left. This caused my head to whip back and forth before I remembered to keep my shoulders shrugged. I basically had to act like a turtle. A Turtle would be great at bobsleigh.

I felt like a bullet going through the long shaft of a rifle. We really were “flying”. I felt safe with an Olympic driver in the front and the time went by so quickly that I couldn’t really think of anything other than the feeling of immense speed.

I had a very good helmet on my head with a nice plastic visor but tears had still formed from the speeds we hit. It was a thrill, to say the least, and it gave me a whole new appreciation for the sport of bobsleigh, as well as a new appreciation for how it must feel to be a speeding bullet.

Although it was a tad rough, I’d love to do it again. Like bungy jumping and skydiving, it’s a thrill that ends quickly and thus creates a craving to experience it over again. There are not too many places in the world to experience an Olympic bobsleigh track but Calgary, Alberta is one of them. 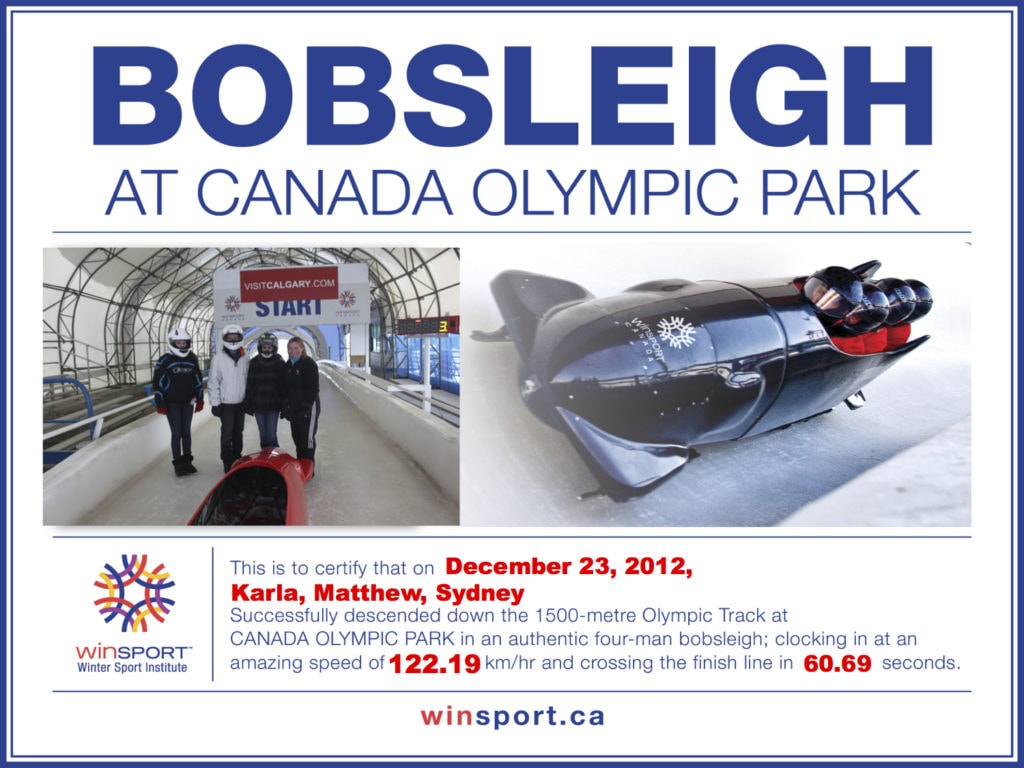 Canada Olympic Park is situated right off the trans-Canada highway on the western edge of the city heading towards the beauty of Banff. Built for the winter Olympics of 1988, C.O.P as its known around the city offers a variety of thrilling activities including North America’s fastest zip-line and the 4-person Olympic bobsleigh. I won’t lie – it’s a tad expensive at $190 per person (update: It’s now $170). Like most unique thrills though, your paying for a one-of-a-kind experience.

I thought I had “felt” it all after leaping off a bridge with a bungee cord attached to my ankles but this was a completely new thrill and one I’m happy to have experienced. If you’re in the area, check out the bobsleigh experience at Canada Olympic Park. If you’re not in the area, check if you have something similar offered near you. Then again, why not plan a trip to Calgary, meet up with me, ride the bobsled, and explore the beautiful Canadian Rockies while skiing some of the best runs in the world.

Due to the speed and roughness of the original line, the bobsleigh experience has changed. what they’ve done is shortened the track just a little, which makes it slightly less fast and less rough. More people enjoy it this way. We had the opportunity to do it again and it was still just as much fun but much less rough, which is a good thing. Instead of 5 G’s, you know pull 3-4 and instead of 120 km/h, you now average close to 100 km/h. Trust me, your neck will thank you. An Olympic athlete is still your driver and it’s now $20 cheaper. Check out our YOUTUBE PAGE to see the video we made about the experience and other videos from across Canada. 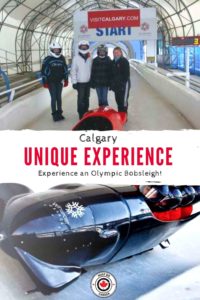 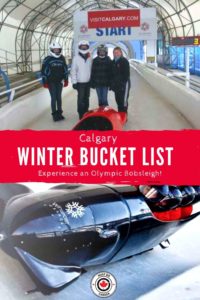