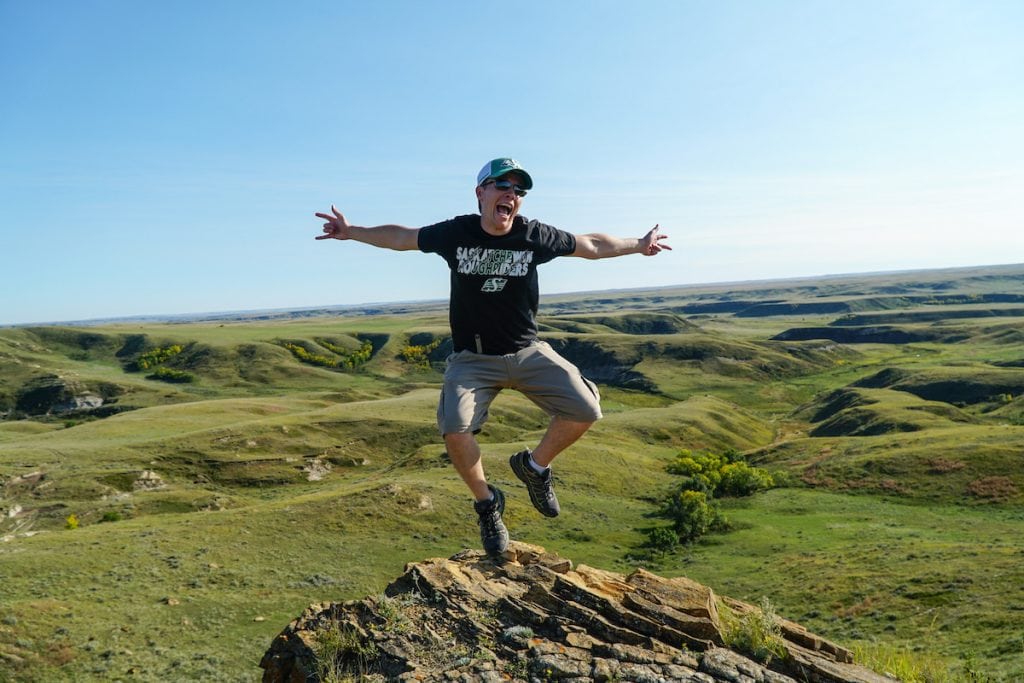 It all starts in a little town called Coronach. This is where a small team of locals offers guided tours of the Big Muddy badlands. With many of the attractions being located on private land, not to mention all the historical information you’d miss out on, guided tours are really the only way to do it. 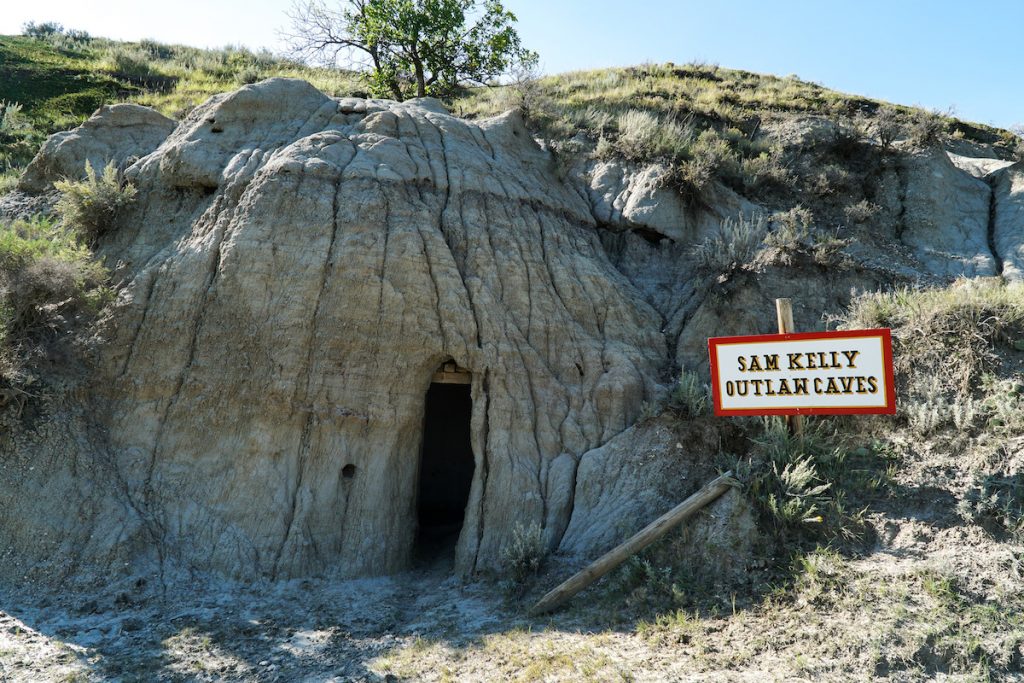 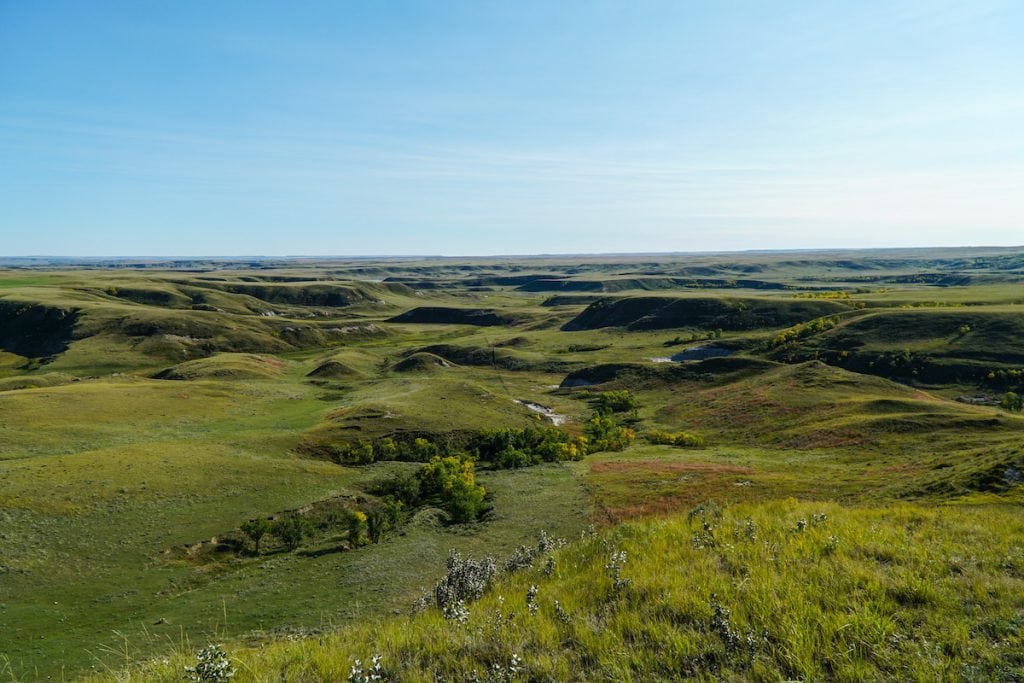 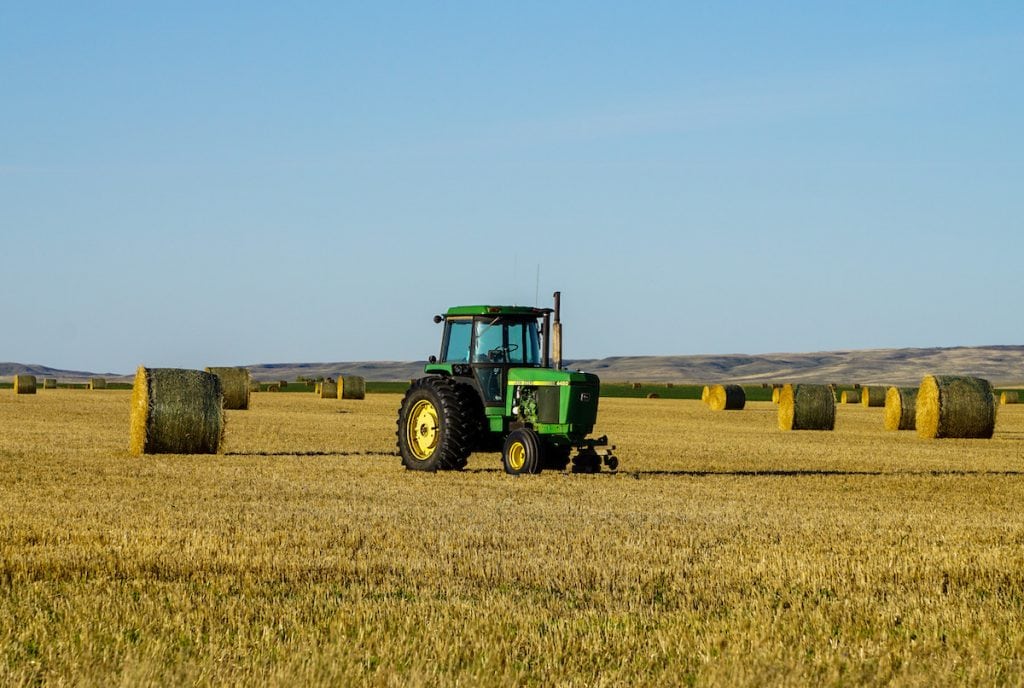 After spending a week exploring some of the best things to do in Regina, it was time to jump back in the vehicle and head out into the vastness of Southern Saskatchewan. We passed by many small communities and farmland along the way before arriving at the visitor centre in Coronach, SK. Here we met our guide, Leanne, who would be giving us a Big Muddy private tour around this beautiful and historic area.

Despite it being 2019, the old-fashioned romance of the wild-west days remains. From cowboys to outlaws, almost everyone is fascinated by those relatively lawless days. Well, some of the famed bandits, including Sam Kelly, Dutch Henry, and the Sundance Kid, used the Big Muddy Badlands as hideouts during their horse-stealing days. Back in the late 1800s and early 1900s, the sweeping landscapes and seemingly endless coulees, which extend from Saskatchewan to Montana, provided an easy place to “disappear” from the police. In fact, the caves that we visited are just 12 miles from the US border. You can see the border from the caves, which is why these sandstone ravines were such a great place to hide. After all, the American police force couldn’t follow you into a new country if they lost sight of you – and the bad guys knew that. The stories that Leanne shared with us are fascinating and it’s just one of the things we loved about the tour.

We also got to visit ancient aboriginal stone effigies, which added to the mystery of the area. As we stood high up on a coulee, standing next to an ancient prayer circle, it was easy to imagine the area with thousands of First Nations peoples dotting the landscapes. We were told that these circles would have held important ceremonies – possibly marriages and things like that. They were held on top of a coulee with views of the surrounding area but never on the highest one. This way, in addition to having less wind, other tribes who wanted to witness the ceremony but not directly be a part of it could look down from higher points. I can only imagine the beautiful picture that would have been if only cameras existed back then.

Of course, there’s more modern history in the area as well. Over the last century, farming communities moved in, as well as various mines. We got to learn all about the local economy and how most of it is now dwindling away. Communities are shrinking, getting smaller and smaller until they eventually won’t exist at all. Part of our tour was visiting an old school, which is now a heritage site, as well as the small community of Big Beaver, which is home to a famous store called Aust’s General Store. Being the only store in the area, they have practically everything someone in the area would need. The sign above the door reads; “If we don’t have it, you don’t need it.” Good ol’ fashioned small-town charm. 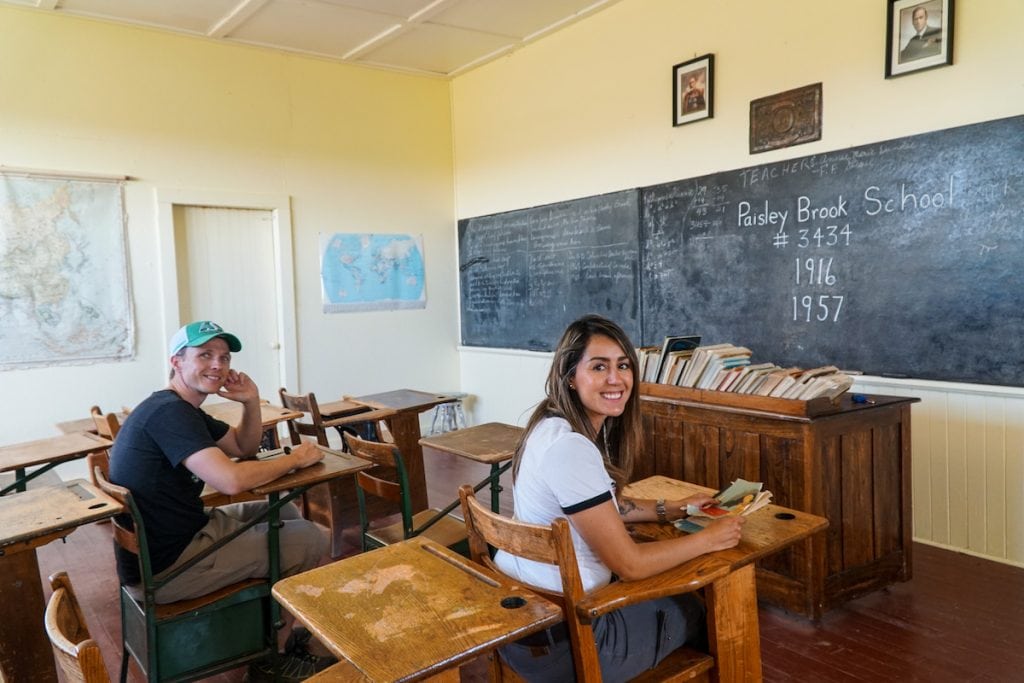 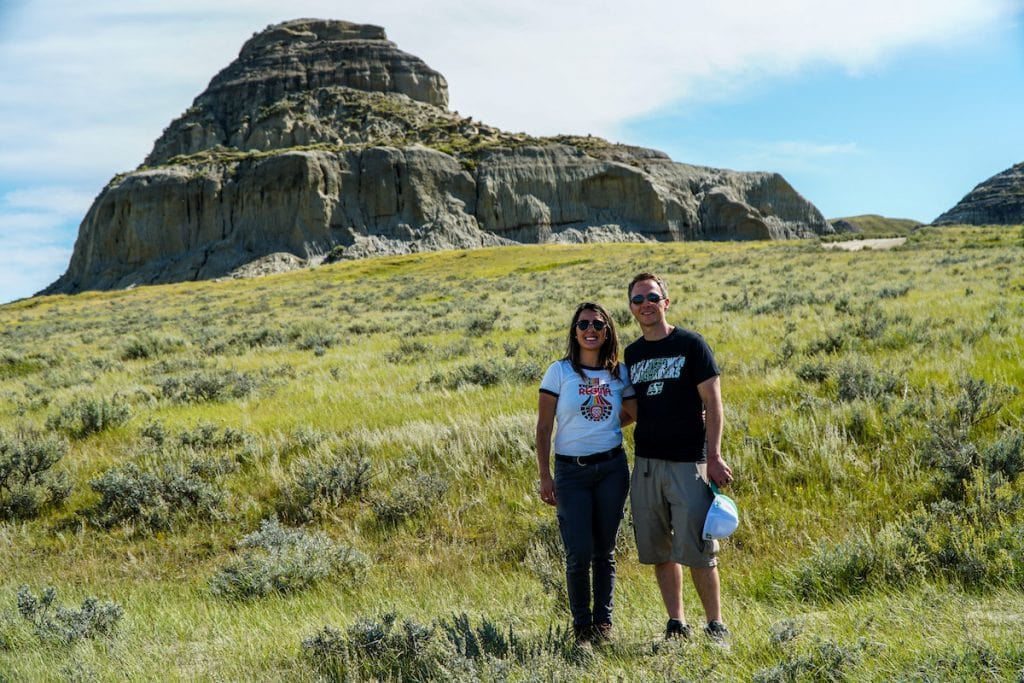 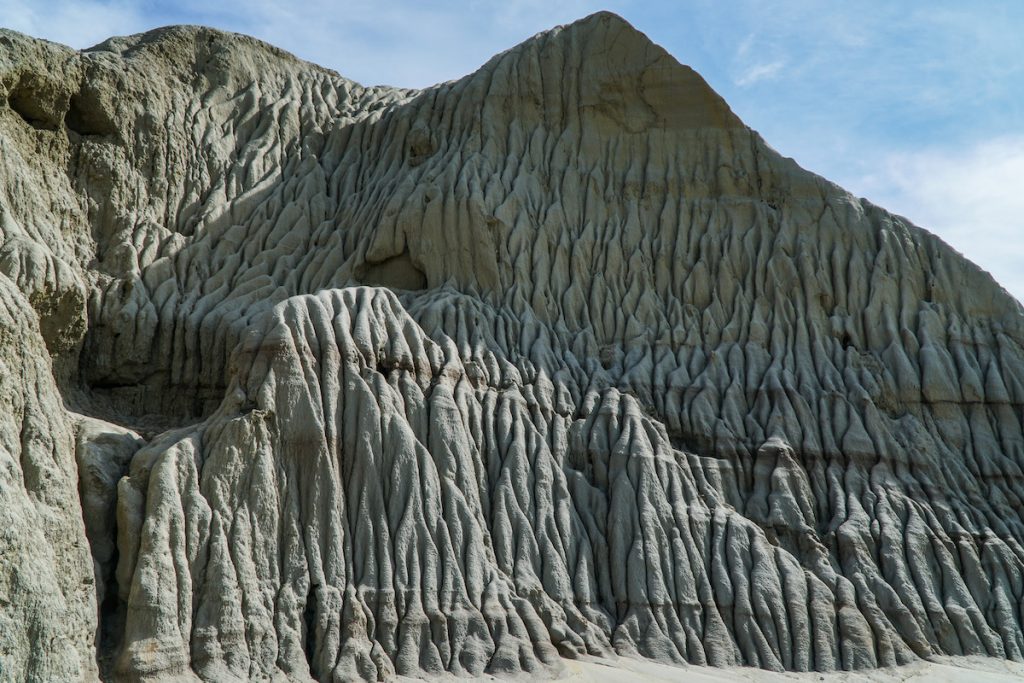 Then there’s Castle Butte, a free-standing relic from the ice age with a circumference of a half kilometre and an elevation of roughly 70 metres. This is the natural attraction that attracted us here in the first place. It seems to rise out of the ground in the middle of nowhere, like a smaller version of Ayer’s Rock in Australia. It was a landmark to the indigenous people, the Northwest Mountain Police, and early Canadian settlers. It’s made up of sandstone and clay-based with alkali and coal deposits. There are caves here as well. The only difference is that it was wolves who found shelter in the butte, rather than outlaws. We walked inside some of those caves before climbing to the top for 360-degrees views of the Big Muddy badlands.

All in all, Big Muddy Saskatchewan is a great place to explore. It’s beautiful, historic, and off-the-beaten-track, giving you unique insight into Saskatchewan. Whether you’re interested in early civilization such as indigenous stone effigies, ceremonial circles, and ancient buffalo jumps or stories from the wild-west outlaw days, a Big Muddy Valley tour is a must. From prickly pear cacti to wind-carved buttes, you’re bound to be drawn to the vastness and beauty of this wide-open landscape.

If you’ve made it all the way down to Coronach SK, don’t forget to visit Grasslands National Park. The East Block, which is home to incredibly beautiful badlands, is just 1.5 hours from Coronach. This is a really unique national park in Canada, not only because it’s the only one protecting prairie grasslands but also because it’s home to some of Canada’s rarest wildlife. It’s also off-the-beaten-track, attracting only 1,200 visitors per year. We’ve been all over the country and this is one of our favourite places to go camping and hiking. Miss at your own peril!

Things To Do in Saskatchewan

Saskatchewan is a great place to explore. If you’re spending more time in the province, don’t forget to read our other articles as well. 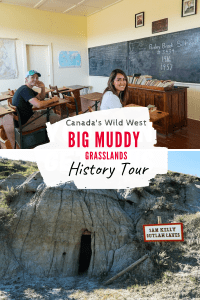