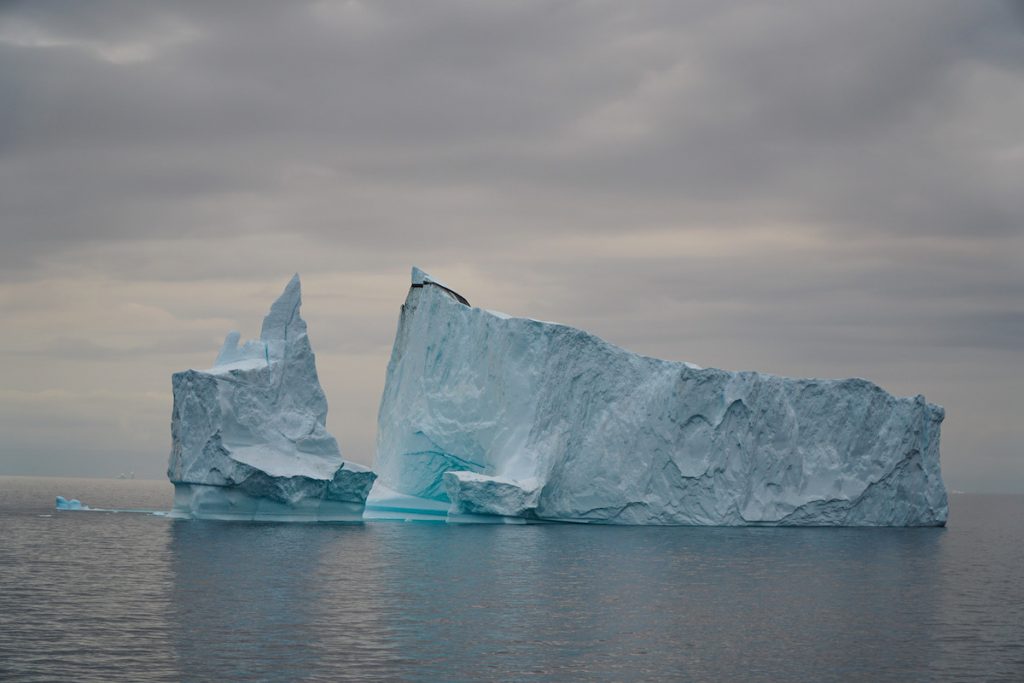 Unlike for the Titanic, however, this was actually good news. After all, we all wanted to see icebergs and now we had one cruising right by our ship. I took a long, admiring look at it and then whipped out my camera to get some photos. After it went by, another one cruised by on the other side of the ship. I ran over to see that one as well. It was a little bigger and had some interesting crevices that had such a deep blue colour. This time, I whipped out my binoculars as well to get an up-close look at it. Then I noticed another one right behind it. Then two more were coming on the other side. Suddenly, there were hundreds of icebergs. Some were cruising by, quite close to the ship. Others were in the far distance, dotting the seascape like giant ice cubes. I couldn’t believe my eyes. No matter where I looked out at sea, there were dozens of icebergs. I thought back to some of the trips I had taken to Newfoundland in hopes of seeing icebergs and feeling so lucky to see one or two. Now, I had hundreds of icebergs surrounding me, flowing by under a clear, blue sky. It was incredibly gorgeous.

Both my wife and I, not to mention most of the other guests on board, must have been out on the ship deck for hours. How could we leave? Just as we’d get ready to go to bed, we’d spot another iceberg in the distance, twice as big as the last one. Some seemed as big as small apartment buildings. Some were cracked in the middle, getting ready to break off into two icebergs. Some had already looked like they were split into two but were still joined beneath the surface of the water. It’s a good thing cameras are digital now because I took hundreds of photos. I played around with the camera angle, trying to capture one of the further icebergs right in between the two in front of me. I couldn’t get enough. Even as the sun began to set, hundreds more continued to flow by. It seemed endless. Then came the sunset. Our first sunset of the trip. There are no words to describe the beauty of a massive iceberg flowing by under the orange glow of a sun setting on the horizon.

Eventually, we managed to convince ourselves to go to bed, but not before one of the Adventure Canada staff members approached us and mentioned how many icebergs we’d be seeing in the coming days. They told us that this was just an appetizer. After all, we had just arrived in Greenland the day before, the country that produces more than 80% of all icebergs in the Northern Hemisphere. We had come to the “iceberg factory”. 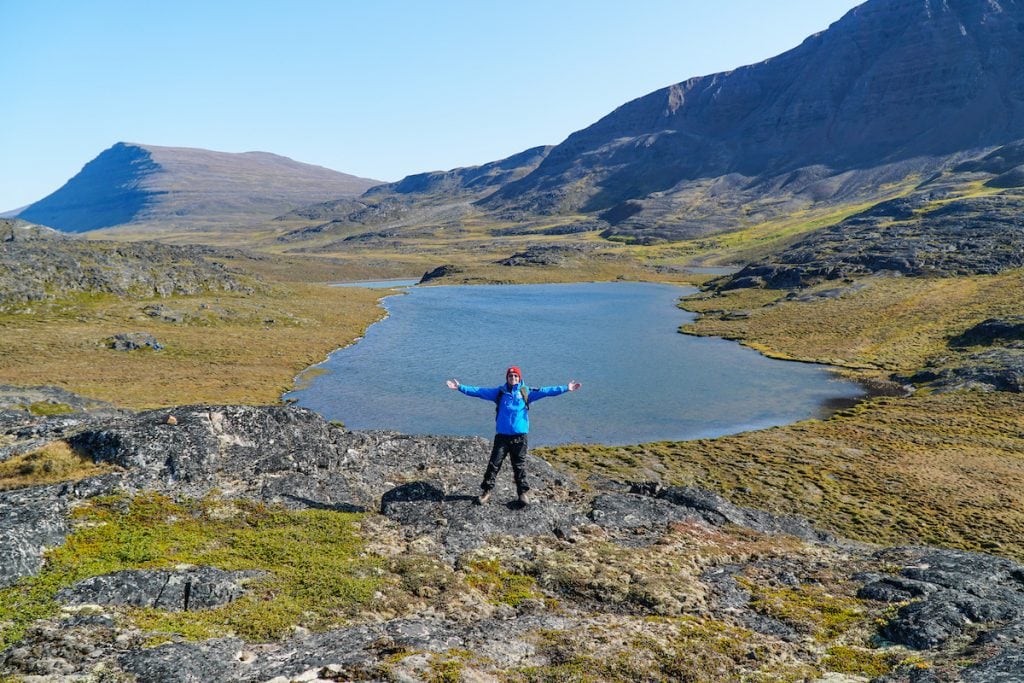 Although Greenland is covered almost entirely in ice, our first experience was lush green. We had just crossed the Davis Strait the day before to embark on a hike around Sigguup Nunaa. This was the first time Adventure Canada brought a group here but I think they’ll come back as it’s quite beautiful. The ground felt like soft tundra, spongy like moss. It was mountainous with very few trees. In fact, most of the trees seem to grow along the ground, close to nutrients and away from the wind. We walked by a small canyon, jumped over a stream and just enjoyed the views looking out to the sea with “little icebergs” all over the place.

The next way, we visited a place called Disko Island and hiked around a lake that was home to two loons. Hearing their call reminded me of early morning fishing trips back home in Northern Alberta. This place also had incredible views and as we hiked around the lake, we picked and ate wild berries. This was pretty much our last hike as now we were moving on to some towns, as well as places where we’d be seeing more ice. 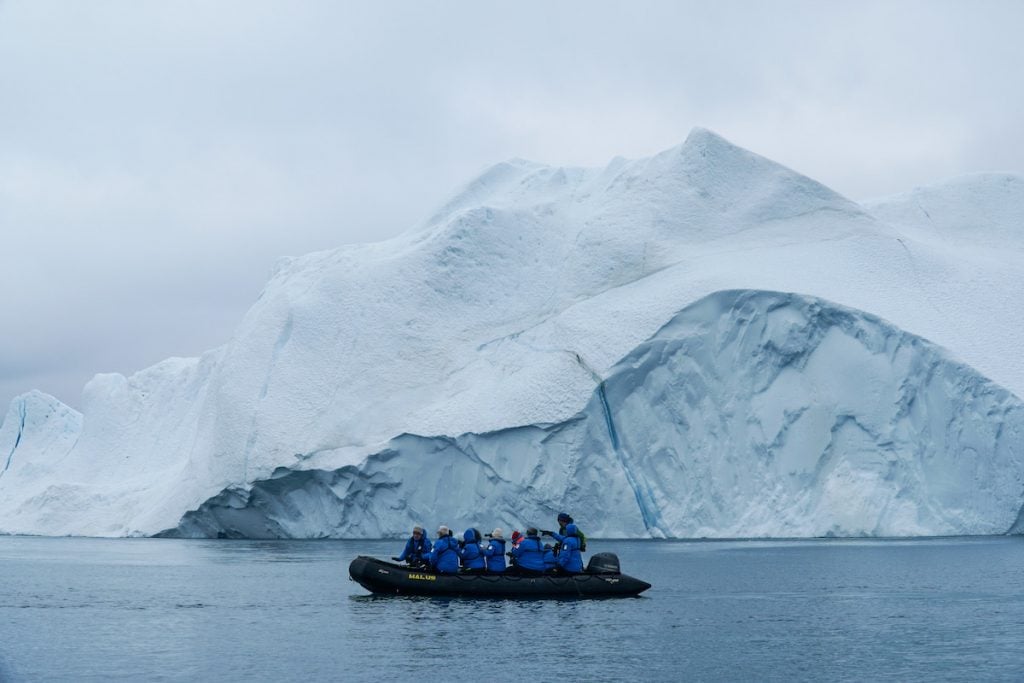 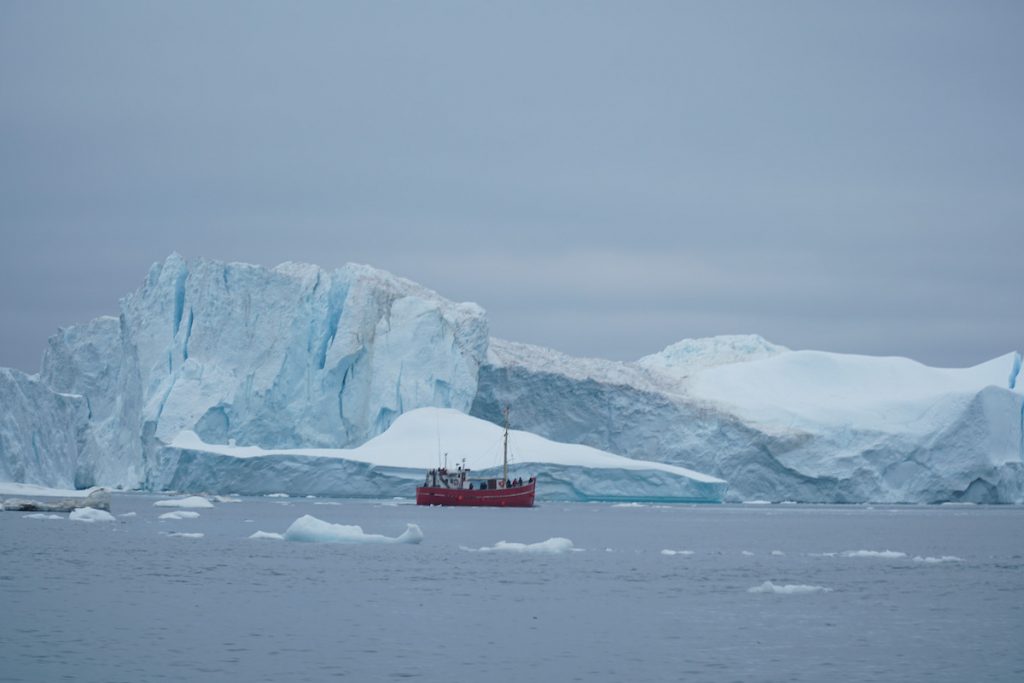 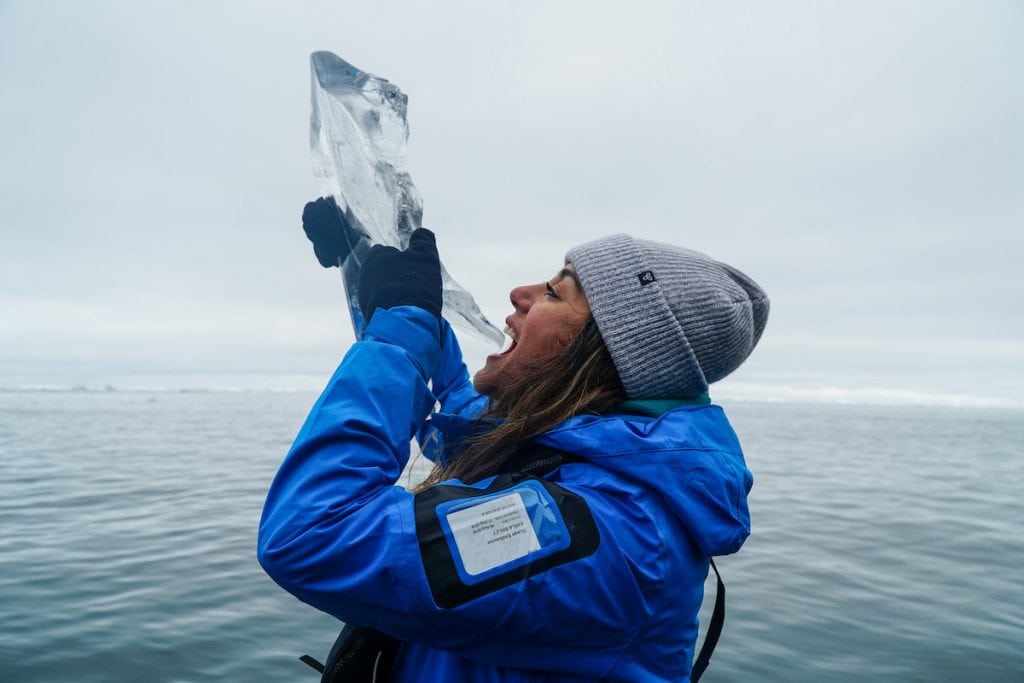 Face to Face with the Ilulissat Icefjord

Our next stop was the town of Ilulissat, which is home to a UNESCO World Heritage Site called the Ilulissat IceFjord. We were so excited to see this place but had no idea what to expect. Some people had told us about it during our cruise, but we had actually never seen photos of it. Greenland was never really a place that was on our radar. But from what people had mentioned, it sounded spectacular. And was it ever. We arrived in the town in the morning and had about six hours to explore. We figured we’d spend an hour getting there, an hour enjoying it, and then find a restaurant with a good Muskox burger. Boy, were we wrong. We actually ended up staying at the Icefjord for a good three or four hours, missing lunch altogether. Even as we began to get hunger headaches, we didn’t want to leave. It’s one of the most incredibly beautiful places we’ve ever seen. If Superman were real, this would be his home planet of Krypton. Everywhere we looked was simply mind-blowing. Ice after ice after ice. Mountains of ice with sharp shards pointing towards the sky. 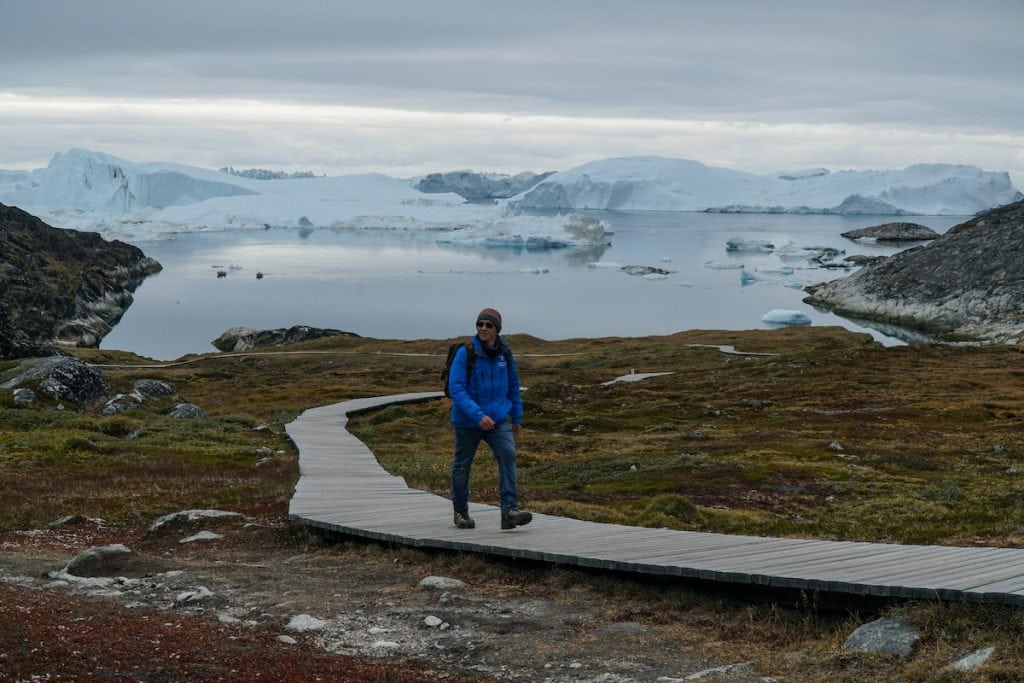 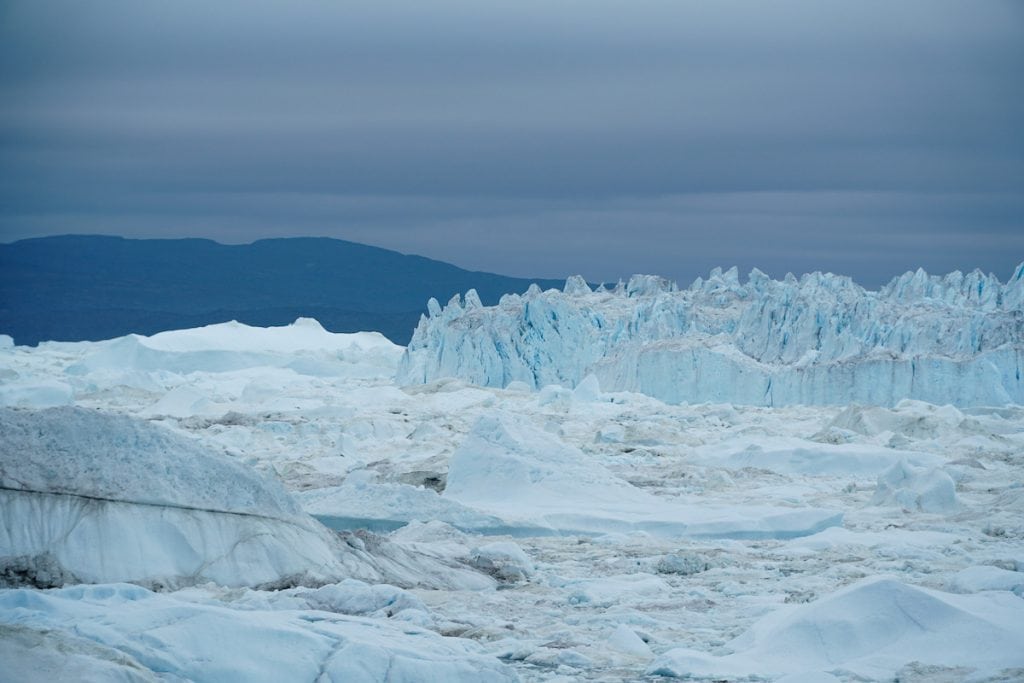 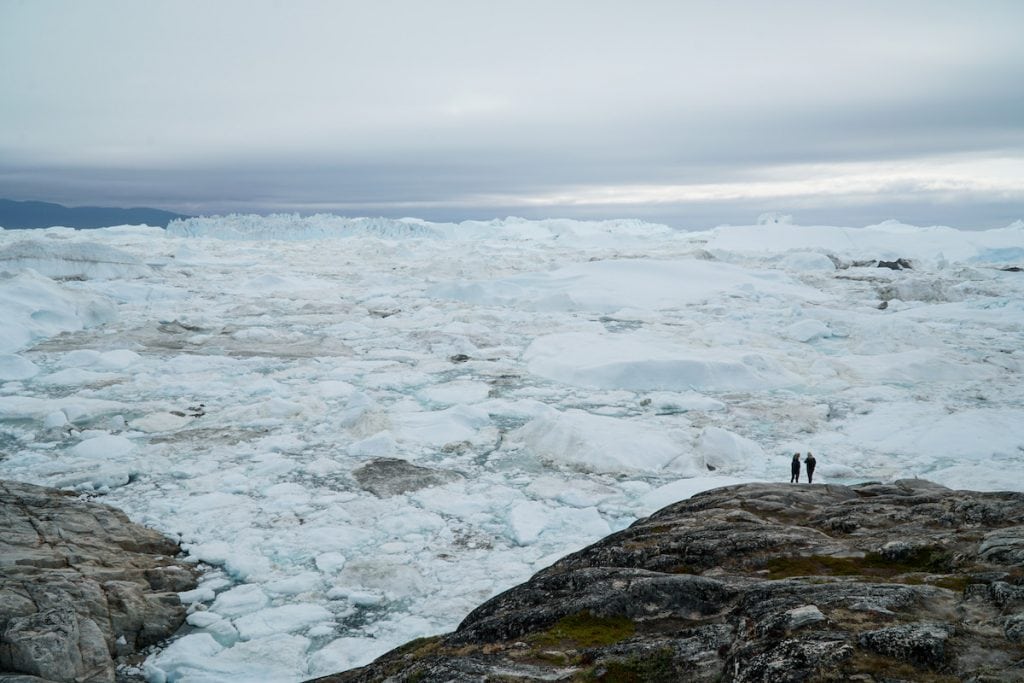 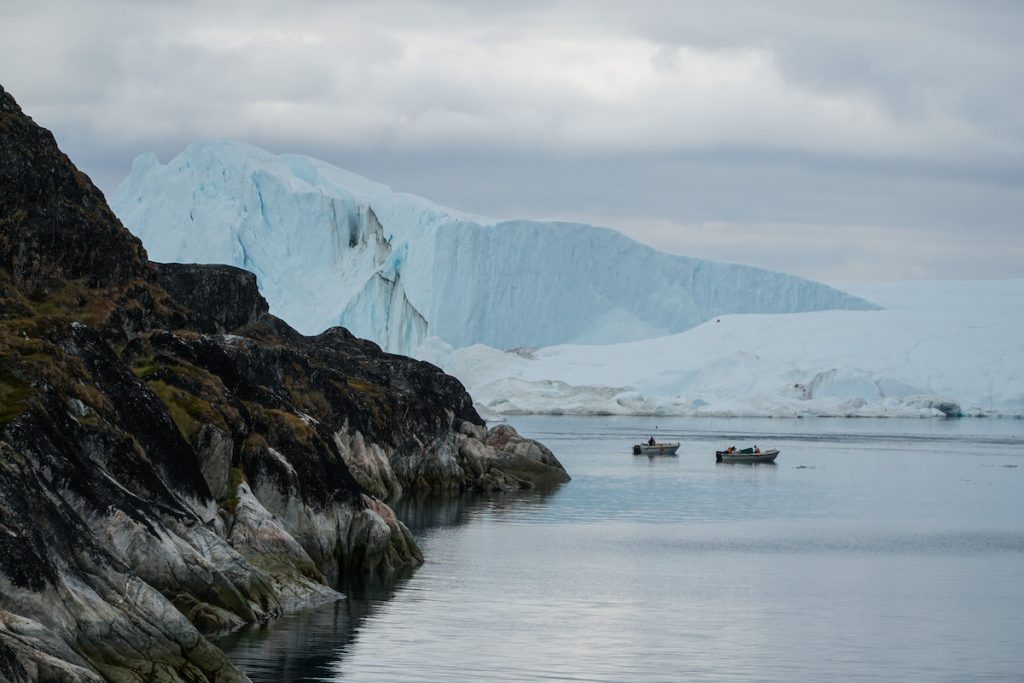 The Ilulissat IceFjord is approximately 55 kilometres long, 5 kilometres wide, and about 500 metres deep. It’s basically just massive amounts of ice flowing down to the sea from the Greenland Ice Sheet. However, what makes it a UNESCO World Heritage Site is the moraine stopping all of that ice from free-flowing out into the ocean. It turns out that the moraine is about 250 metres deep, which creates a roadblock for all that ice. They get trapped, causing the biggest ice traffic jam on Earth. A traffic jam much worse than Los Angeles, Mexico City, and Toronto combined. Practically no movement whatsoever. Eventually though, after hundreds or thousands of years, the sheer pressure of it all, combined with some melting, causes icebergs to break free, entering the sea and flowing down to places like Newfoundland and Labrador. It’s a magical experience to stand before it and just admire this incredible natural attraction.

The town itself is also beautiful. Colourful houses dot the rocky landscape, reminding me of Newfoundland. However, this is a historic Inuit village combined with a new cosmopolitan culture. Paved roads travel throughout the community, passing by various stores, homes, a busy harbour, and thousands of sled dogs awaiting their working winter. We didn’t get to try any of the restaurants, unfortunately, because we had spent too much time at the Icefjord. However, we did stop into a popular grocery store where we bought some chocolate danishes and other pastries. I do wish we had tried the Muskox burger though. It sounded delicious. 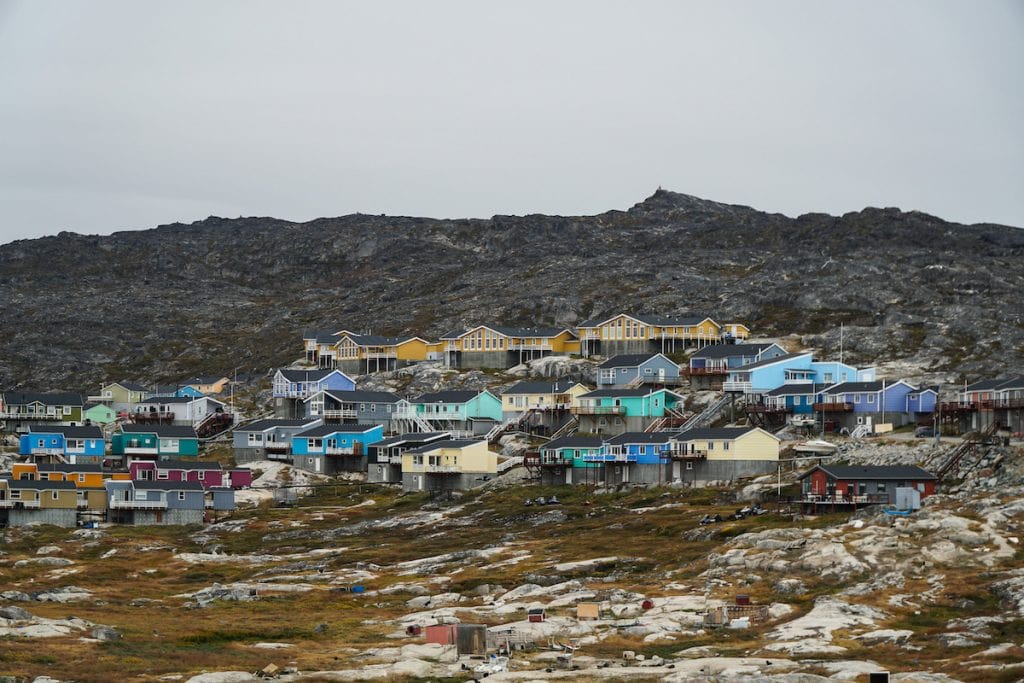 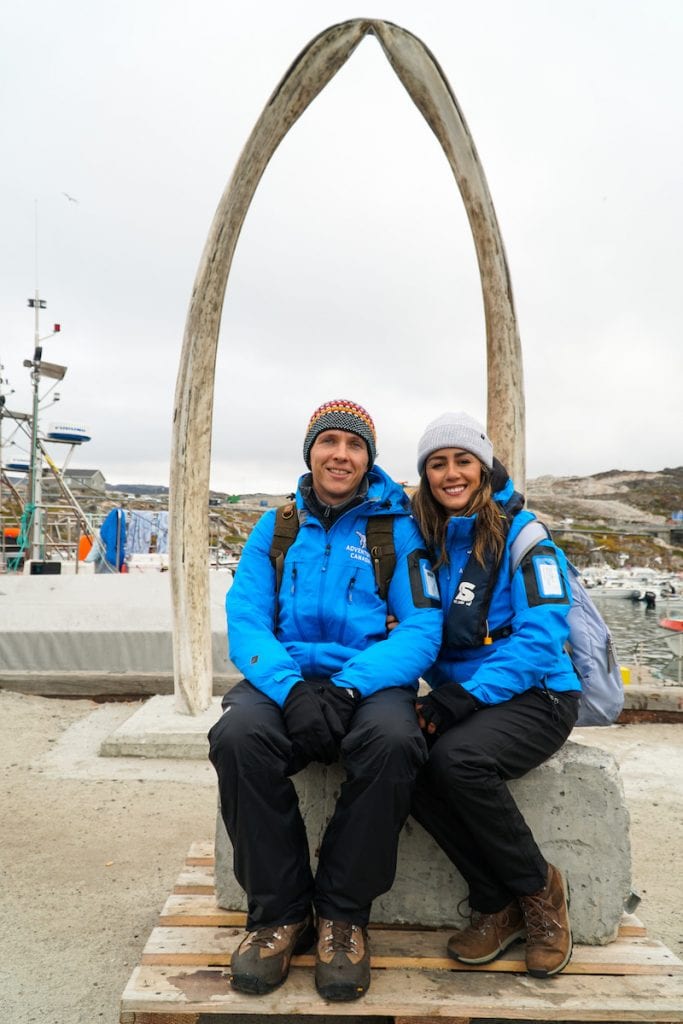 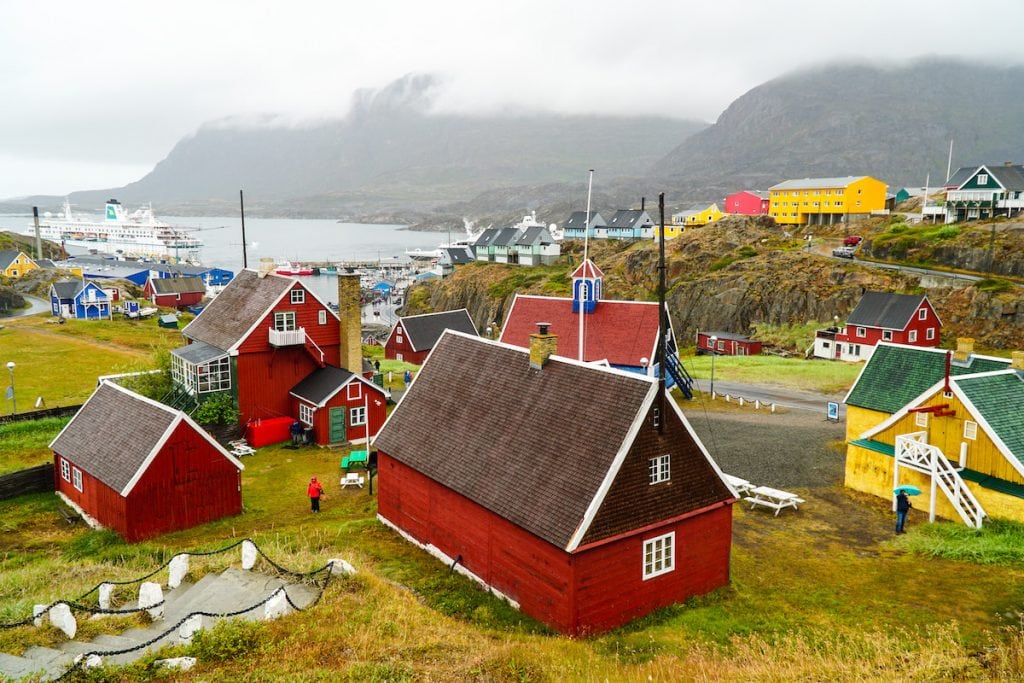 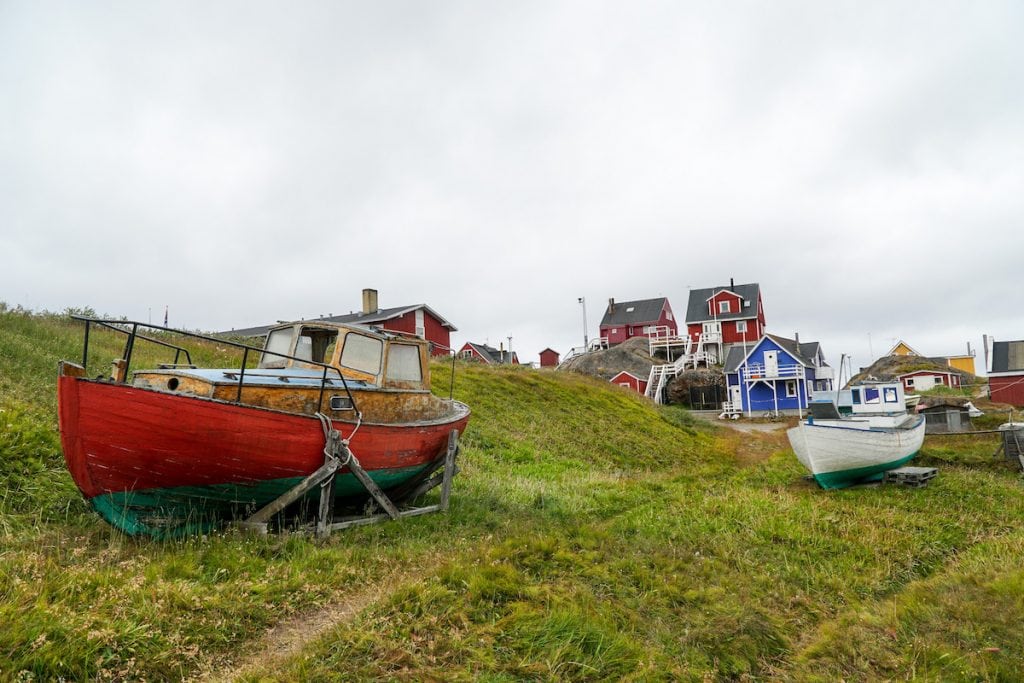 This wasn’t the only town we visited though. The next day, we explored the town of Sisimiut. Here we had a local give us a tour of the town, stopped in at the local museum to learn about the culture and ancient history, and looked at some of the handmade souvenirs, all of which were far too expensive for us. This city felt much bigger than Ilulissat. It was really interesting to learn about life in Greenland. For example, It turns out the colourful houses are not just there to be pretty. They have a purpose. Back in the day when the Danish first arrived, they couldn’t communicate with the local Inuit. One of the ways to help was to colour-code the buildings. I don’t remember the exact coding but a hospital might be yellow whereas a school might be blue. They’ve since kept up with that tradition and it makes the town very beautiful.

At this point, we had only one night left on the ship before arriving in Kangerlussuaq to board our charter flight back to Toronto. But before leaving Sisimiut, Adventure Canada had a professional local kayaker paddle out near the ship and give us an incredible demonstration of his talent. He rolled around and around, went upside down, and flipped back into position. He’d paddle the kayak on to its side, almost exactly horizontal with the water. He even paddled while being upside down in the water. It was very cool to watch and a lot of it has to do with hunting. For example, he may lean to the right and paddle almost on his side to shield himself from the wind or from the eyes of his prey. I’ve only kayaked once and I remember how hard it was to flip upside and back to position. I had to eject myself from the kayak. This guy made it look easy.

All in all, Greenland was an incredible experience, not only because of the natural beauty but also to learn about their culture and to see the differences between the Greenlandic Inuit and the Canadian Inuit. It was a magical experience to see so many massive icebergs and to stand next to the place where they all come from. From exploring Nunavut to exploring Greenland, Our Adventure Canada High Arctic Explorer trip is one we’ll never forget. 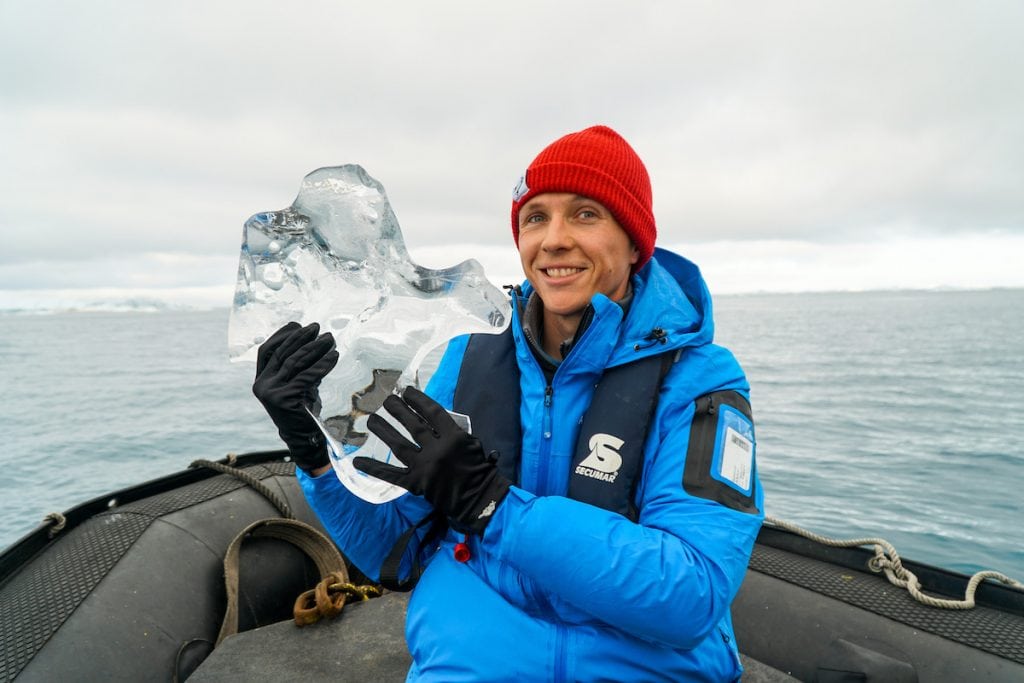 If you’ve made it Greenland, you may as well come to Canada too!

For more things to do in Canada, you may like these articles below: 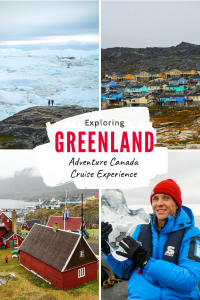 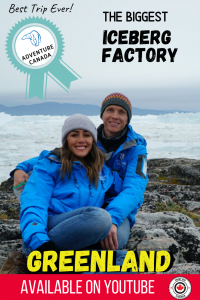