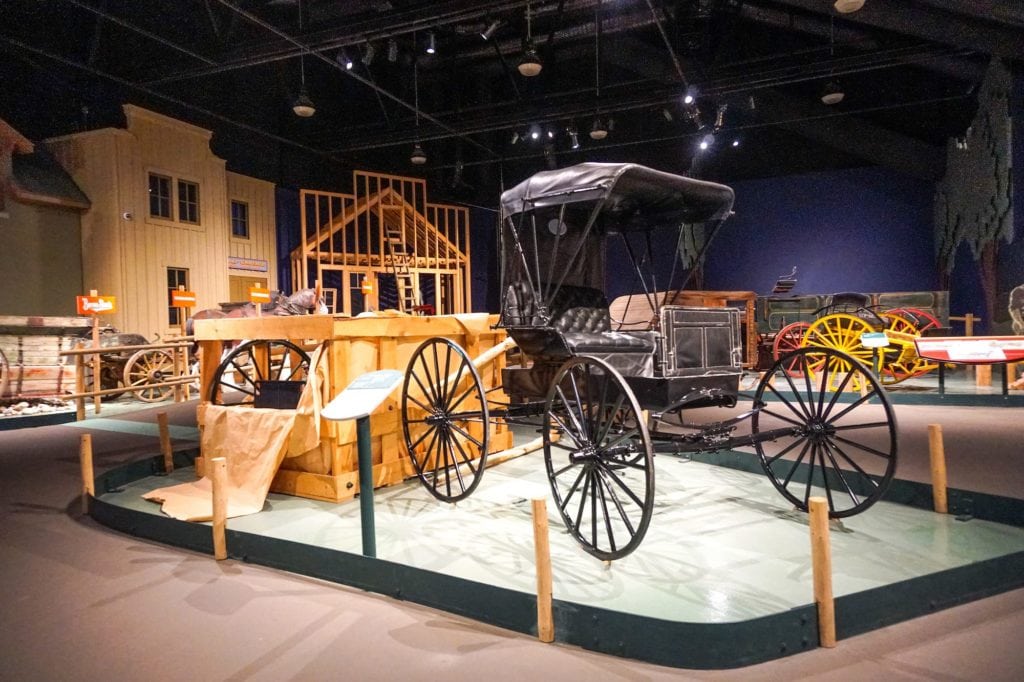 I’m always amazed by big attractions that lay hidden away in small towns just beyond the beaten path. I find travel is like an onion. As you peel away one layer, another emerges. Such is the case for the Remington Carriage Museum, which is located in Cardston, Alberta. Despite living in Alberta and traveling extensively within the province, I had never heard of this museum until I was on a writing assignment with Zenseekers to showcase Southern Alberta.

The Remington Carriage Museum is home to more than 270 carriages and is the largest of its kind in the world. Upon entering the museum, we were essentially transported back to the late 1800’s and early 1900’s, getting a glimpse of carriages that carried pioneers and some that carried the rich and famous. As someone who grew up watching Western movies, I really loved seeing the overnight carriages, decked out in white canvas, used by pioneers traveling across the country. We learned all about Don Remington (1914 – 1987) and why he created this place. We also learned of their newest exhibit featuring Robert McLaughlin, the entrepreneur behind the largest carriage manufacturing company in the British Empire. Considering how big of an impact this family had on Canada, I was surprised I had never heard of them before. They even created Canada Dry Ginger Ale.

(Read more: An ‘incredible Canadian story’: Romancing the past at the Remington Carriage Museum

After exploring the carriages, we moved outside and into the stables to see the horsepower that moved these early vehicles. Home to massive Clydesdales, Quarter Horses, and Canadians, the Remington Carriage Museum stables are a great place for horse lovers. Visitors can take carriage rides around the property, learn how to groom horses, or in our case, see them getting shoed. This was a really cool experience as it doesn’t happen every day and it’s not something either of us had ever seen before. At first, it seems strange. A Farrier (that’s what a “horseshoer” is called) heats up a shoe in an oven to soften it up, then basically nails it to the bottom of the horse’s hooves. It basically stinks like burning flesh or something similar. It looks painful but it’s not, otherwise, the horse wouldn’t be so calm. After all, for them, it’s like getting new Nike’s every week. I just loved getting new insight into a world I knew nothing about. I didn’t even know that this was a craft. We got some great photos too. 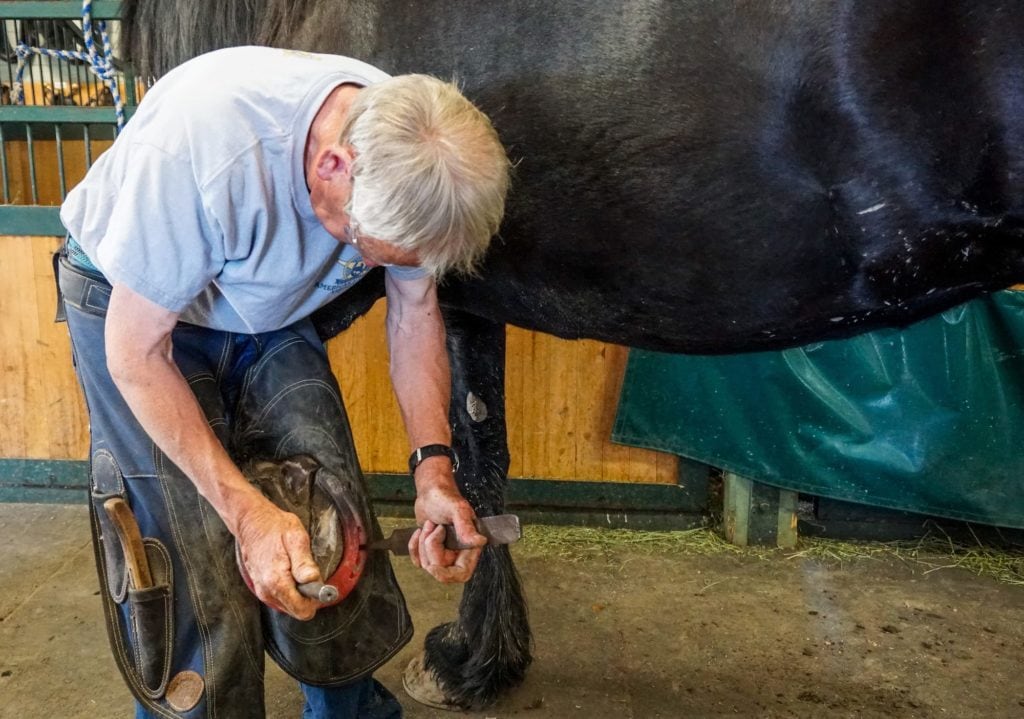 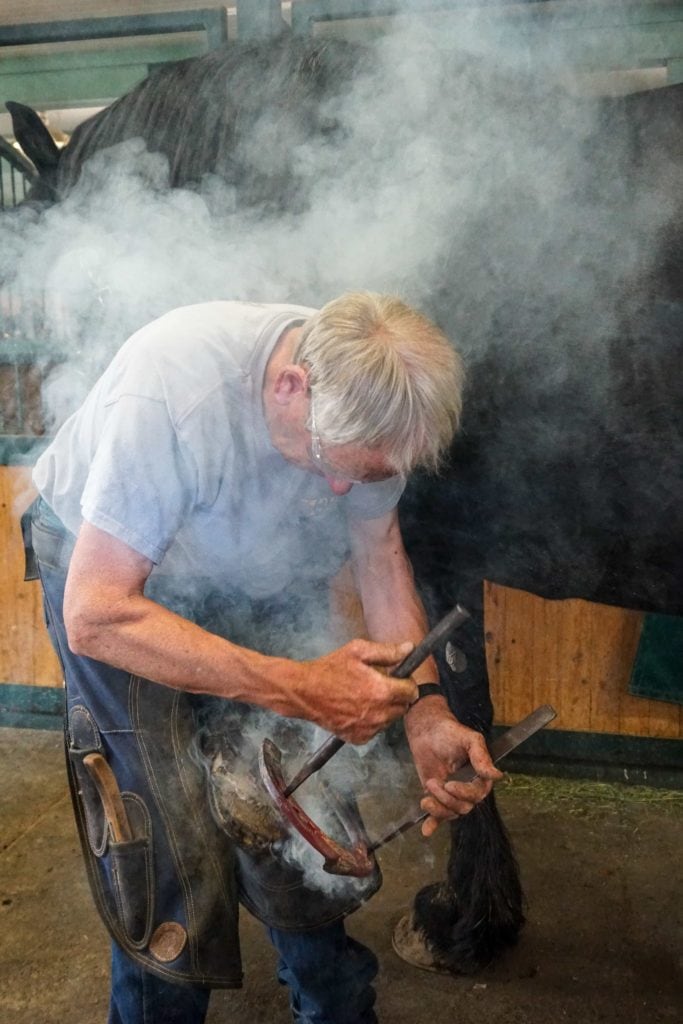 Before departing the property and going from Cardston to Lethbridge to experience Fort Whoop-Up, we visited the Blacksmith shop to see them forge various crafts just like back in the day. He demonstrated their coal-powered oven, heating up the metal, and making it into a mini horseshoe, which he then gave to one of the visitors as a souvenir. You can learn about history in a book but it’s so much better to be able to experience some of it first hand.

Between beautifully restored carriages, an education in carriages and history, as well as their horse stables, I can see why the Remington Carriage Museum has become such a big attraction in Southern Alberta.

Things to do in Cardston, Alberta

As is always the case, if you’re looking to visit Cardston Canada and check out the lovely Remington Carriage Museum, you’re probably going to be looking for other things to do in the town of Cardston, whether it’s other attractions, hotels, or restaurants.

Cardston is a small town and as such, there is not a large number of things to do. It’s also a dry town, which means you won’t be able to buy alcohol. This is due to it being a largely Mormon town, and it’s actually quite famous for its Mormon temple. There is lots of beautiful scenery around, however, and you’re also close to other popular areas such as Crowsnest Pass and Castle Provincial Park. There are plenty of Cardston restaurants and Cardston hotels to choose from, including the South Country Inn Cardston, which seems to be a popular choice.

Cardston is located quite close to the USA border (Montana), about 45-min Southwest of Lethbridge, Alberta. From Calgary to Cardston, you’re looking at approximately a 220 km / 2.5-hour drive. You can also extend the drive by 30-minutes and drive the Cowboy Trail, which takes you through scenic areas and historic ranches.

Cardston is roughly a 2.5-drive south of Calgary. 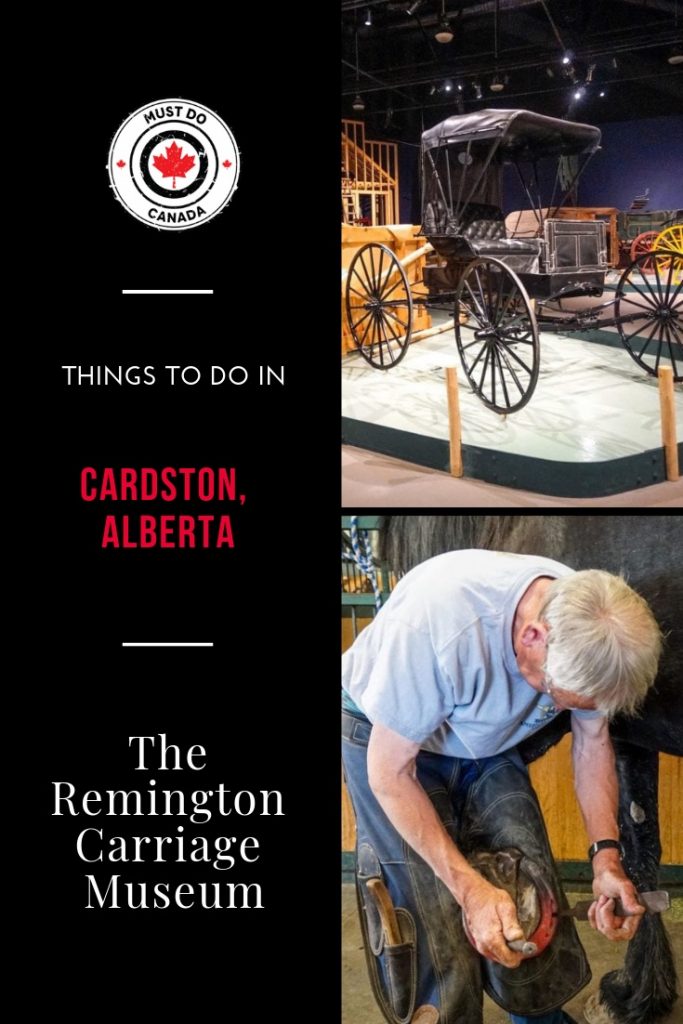