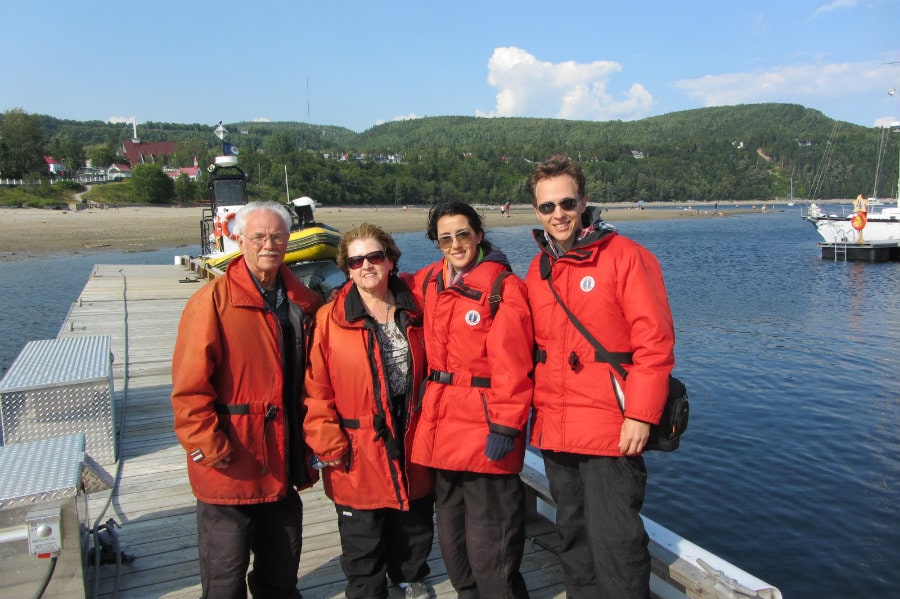 I can honestly say that I never once imagined going whale watching in the province of Quebec. That’s not because I don’t like Quebec. I do! It’s because I didn’t realize that whale watching was a possibility. It turns out that the St. Lawrence River is connected to the ocean, which brings all sorts of whales to the region.

We happened to be in Quebec for my 29th birthday and we’re thinking of things to do in Quebec City. On the day before my birthday, my family and I went strolling around the old city of Quebec, drinking amazing mochas, standing in front of incredible wall murals, eating delicious pizza and tomato garlic soup, and even watching a FREE outdoor Cirque Du Soleil show. Walking around the old walled city is always a great thing to do. But once we were back at the hotel, Karla mentioned that my birthday was the next morning and wanted to do something special for it. As we began to muster up ideas, she mentioned that when she was in Quebec seven years prior, she had gone on a Tadoussac whale watching tour to see Humpback Whales.

I literally had no idea that whales came up the St.Lawrence Seaway, but it turns out, lots of them do!

I got on the phone and called up AML Cruises and booked us in for their Zodiac Expedition, which is pegged as the ultimate three-hour Tadoussac whale watching tour in a zodiac boat. Even better, my family paid for it!

July 31st came quick. I was now 29 years old. Thank you for the applause. The only unfortunate part was that I had to wake up very early and I was very tired. We had a three-hour drive ahead of us to make it Tadoussac in time for the tour. I grabbed an absolutely delicious Mocha (for some reason, mochas are amazing in Quebec) from the hotel’s on-site cafe and jumped in the vehicle.

Three hours later, we were crossing the free 5-minute ferry to the beautiful little town of Tadoussac. We were in a rush, unfortunately, so we had little time to actually check out the town. We did make the tour though, which is the most important part. We then slid into the provided warm suits, threw over a life-jacket, and got ready for some action-packed fun and excitement. 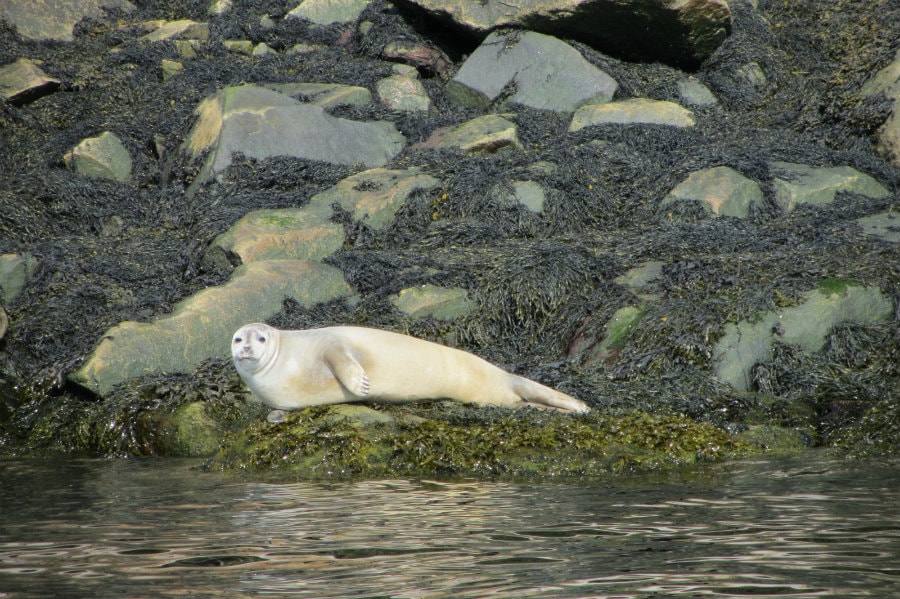 For those who don’t know what a zodiac boat is, it’s basically a giant raft filled with air. They are very fast and can turn very quickly, and are quite difficult to tip. They basically hover over the water and allow you to get much closer to the whales than a big boat would. This came in handy because the first Humpback Whale was marvelous. A big dark lump rising out of the water with a big blow of water launching into the air. Then, as if he was putting on a show, the giant tale whipped out of the water and softly entered back in. It was amazing to see such a massive and majestic creature so close. The whale must have been 150-feet or so from the boat. Maybe closer. It was like watching one of those Planet Earth movies except it was real life.

Now I wanted to see more.

Thankfully, my birthday wishes were answered.

We must have seen about 12 Humpback whales that day. Fins to the right of me, tails to the left (get it?). The excitement didn’t stop. Even when the whales weren’t giving us a show, the captain would be driving at very fast speeds and would suddenly make a sharp turn, allowing the boat to go on its side. Perhaps it was a little scary but a lot of fun at the same time. As I said, these boats don’t tip easily.

After watching whale after whale, we went into a quiet little cove to see some of the big seals that were tanning in the sun. We were also lucky enough to see a beluga whale! I had never seen one of these stunning creatures in the wild before and although it was far away, it was a perfect way to end an incredible day. (update 2017: we’ve now gone snorkeling with Beluga whales in Churchill, Manitoba).

After spending about half an hour in the quiet cove, the captain brought us back to shore…but not before trying to make us tip over again. Three hours was a long time on the water but the time goes by so fast when you’re seeing so much action. I wish we could have stayed longer.

If you’re ever around Quebec City, I HIGHLY recommend Tadoussac whale watching if it’s the whale watching season. If it is, GO. You won’t regret it. If there are whales, you’ll see them from any boat but I’d recommend getting in a Zodiac if you want to get as close as possible.

Where to Stay in Tadoussac Canada

There are a variety of Tadoussac hotels but if they’re full, there are other small communities around. Tadoussac accommodation can be hard to find and/or expensive in the busy summer months. Another option is to stay in Quebec City, which is three hours away. To learn more about the best things to do in Quebec, check out our Quebec video on YouTube.

Have you ever gone on a whale-watching tour before? Where?

(Note: this post was originally published in October of 2013 but updated in 2019) 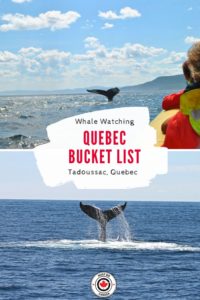 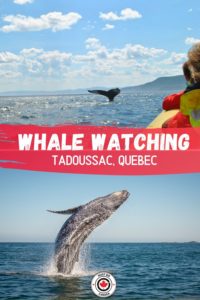 Save Money Across Canada!

Want to save money on some of the top things to do in Canada? Grab the Canada Saver Card and save $$$ on more than 100 activities, adventures, and restaurants across Canada.